By Dan McClenaghan
July 7, 2014
Sign in to view read count 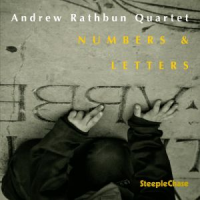 Toronto-born saxophonist/composer Andrew Rathbun is no stranger to pushing the boundaries. He has released a dozen superb modernistic CDs under his own name, perhaps most notable of these his nod to his fellow Canadian, writer Margaret Atwood, Sculptures (Blue Moon, 2002), and 2009's and Where We Are Now (Steeplechase Records). Rathbun, on all of his previous outings, has shown a true talent for putting together great bands. The disc at hand, Number & Letters is right there in that regard, with perhaps his finest and most simpatico group of players on this mostly quartet outing with Phil Markowitz on piano, Jay Anderson on bass and Bill Stewart in the drummer's chair.

Rathbun has always displayed a "Miles Davis Second Great Quintet" influence, but Numbers and Letters sounds much more his own voice, beginning with the stealthy "Bad Call," a high energy tune that sounds like musical subterfuge, a bit P.O.d, with a prickly piano solo and turbulent bass/drums backdrop, with tenor saxophonist Rathbun zeroing in on his target like an attack drone.

"Tears and Fears" features Rathbun on soprano, on a dreamy, Wayne Shorter-ish exploration of the ballad form, while "Playpen" has a playful mood, with the rhythm section adding some resonant majesty to the sound.

The set is, in large part, a celebration of parenthood. The inspiration of "Sleep Please" is obvious to any new parent. Markowitz opens it like a delicate piano note lullaby, with Rathbun entering blowing soothing soprano lines, a gentle and slightly weary plea.

Rathbun burns "Sculpy," with short choppy lines in front of Stewart, who's trying to build a fire on drums. Taylor Haskins joins the quartet on "Counterpoint" and "Again?" the former a wandering conversation with some beautiful unison work on the horns, the latter is the band at its noir-ish best that lightens in mood a few minutes in, until Markowitz gets his solo and roams the dark streets again.