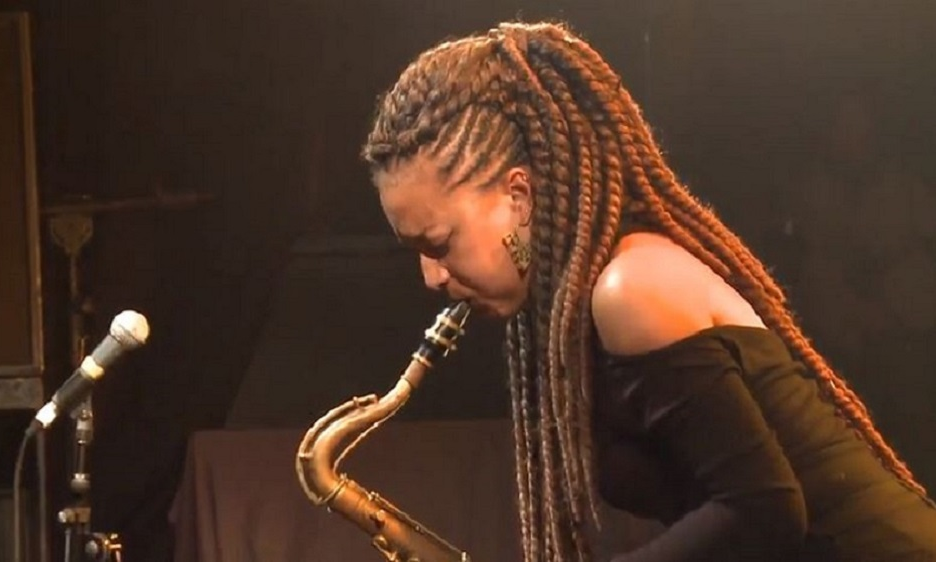 The tables and chairs in the back half of Black Box filled quickly, leaving a yawning open space in the front half of the room. A standing gig—those were the instructions from London saxophonist Nubya Garcia, no doubt seeking the intimacy, atmosphere, and perhaps even dancing, that a sit-down gig often negates. Most jazz-related gigs in Belfast tend to attract an older audience, for whom standing for a couple of hours isn't an attractive prospect. Hence the tables and chairs.

Yet Garcia's pan-global rhythms—roots-based yet sophisticatedly urbane—habitually attract a younger crowd that's keen to move and groove. In Belfast too, they duly arrived—their numbers bolstered by those unsuccessful in their pursuit of a chair—to take up position in front of the stage. It's a telling scene that reflects jazz's seemingly ever-confused identity —jazz as art, or jazz as entertainment?

Garcia, for her part, takes her art/entertainment seriously, as evidenced by the intensity of this eighty-minute performance. The opening number "Fly Free," a feisty affair, saw drummer Sam Jones working up a sweat to Garcia and keyboardist Joe Armon-Jones' burning solos. Jones, who joined the group at the start of the year, poured tireless streams of polyrhythmic fire into each number, spurring the impressive Garcia and Armon-Jones on. Anchoring the quartet, double-bassist Daniel Casimir also enjoyed enticing solo space, drawing more subtle textures from the drummer.

Garcia's Caribbean heritage was to the fore on "Source," its dub-reggae vibe cut through with seductive broken-beats. On this vibrant, clubby number, Garcia took a back seat to Armon-Jones, the saxophonist's painterly melodic lines contrasting with the keyboardist's spiky attack. A stormy drum solo announced "Hold," which morphed from heady, samba-tinged charge to a reggae-esque groove that gave wing to a mazy improvisation from the leader.

An unrecorded number, "Pace," began with a tuneful unaccompanied bass intro, Casimir then landing on a bass ostinato that ushered in the quartet, steered by Garcia's mellifluous, and gradually more probing lines. Garcia built her solo patiently, feeling her way, pulling herself up assuredly to a peak crowned by ecstatic, soaring notes. Armon-Jones followed suit, his burrowing riffs unearthing expansive byways of exploration.

The keyboardist, a leader in his own right, brings much to Garcia's table with his nuanced yet probing comping and exhilarating solo forays. Clearly, he and Garcia speak the same musical language, where the relevancy of jazz resides in contemporary rhythms and vocabulary. And yet, for all the Afro-Caribbean, Latin and urban British beats, the quartet exuded the straight-ahead energy of a New York combo—trans-national traditions perfectly balanced.

On the hour-mark Garcia began the farewells, which seemed overly premature. Thankfully, there was juice in the tank for a seventeen-minute rendition of "When We Are," the title track of Garcia's second EP, released early 2018. Unaccompanied, Garcia wove together a string of short flurries and motifs for fully five minutes before her rhythm section sparked into life. With a rhythmic springboard in place, Garcia stretched out, her measured phrasing spiced by keening exclamations. Armon-Jones, stoked by Jones' inviting temporal shifts, ventured forth one last time with an imaginative solo that bridged historically grounded jazz idiom from bop and fusion to more contemporary vernacular -much like the quartet's language as a whole.

As the last note died, those at the back joined those at the front, standing to acknowledge Garcia and her musicians' excellence. Garcia's musical horizons stretch far and wide through time and space, embracing a vision of jazz at once unifying yet progressive. That's not necessarily an easy task.

There will always be those who sit and those who stand, but as long as jazz, like Garcia's, can appeal to chin-strokers and booty-shakers alike, then the future for this wonderfully hybrid music is rosy enough.