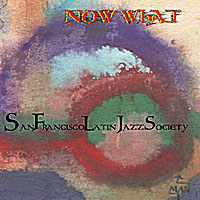 Now What is raucous, adventurous music from The San Francisco Latin Jazz Society—the first of two winter 2012 releases from this electric, bluesy ensemble—and a reminder that Stateside studio jazz is not permanently lurching toward predigested pop territory as it might sometimes seem. On its website, SFLJS states it has had many aliases, including New Latin Jazz Society, Descarga Libre, the Psychedelic Mambo Cult, Los Pinguinos and Latin Jazz Descarga.

This album recalls Miles Davis' Bitches Brew (Columbia, 1970) era, but not in any derivative or nostalgic way; rather, it's reminiscent in attitude and musical edge. The band may invite comparisons to Davis' but that is not a pose; they have the goods to back it up, revisiting eras that were gone too soon. Jim Gordon is the multi-instrumentalist and composer, but he is by no means the star of this is a vibrant ensemble.

The disc opens with the aggressive but ultimately meditative 14-minute "Sun Ray" with the immediacy of a jam session. In broad strokes and crystalline detail, saxophonist Gordon's primal yearning is set against conguero Alex Nunez, conjuring disquieted emotions and atmospherics. Guitarist Scott Brown's cascades demonstrate the sharp delicacy of a mandolin as the piece keeps moving forward with Gordon's spine tingling sax line snaking in and out of Nunez and drummer John Rodriguez's percussive streams.

"Now What" follows and, ironically, has time-warp musicality with flashbacks to fusion-era jazz—straightforward and electric in the best sense. There are reverential markers, including roadhouse Carlos Santana blues, skaggy keyboard electronic and even echoes, à la Miles Davis' Sketches of Spain (Columbia, 1960), all heralding the past for a return.

"The Creator" turns on a lush guitar calypso-beat, with tempo shifts keeping it danceable and propulsive and Gordon's wending horn in warm distracted play with his own elegant and breezy multi-tracked piano. "The Insurrection" is a brew of sultry polyrhythmic fanfares, rocky guitar riffs, and guitar lines that recede into a sultry blues before igniting into the primal scream of Gordon's coda. The finale, "Something for Freddie," is a high-velocity salsa, with a whispering Tango hall piano counterpoint—an example of the dazzling musicality throughout What Now.

Sun Ray; Now What; The Creator; The Insurrection; Something for Freddie.