Zoe Gilby: Now that I am real 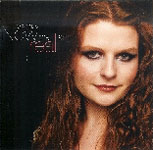 Zoë Gilby is a young vocalist making her recording debut with Now that I am real. Following her father's footsteps into jazz—British trumpeter/arranger Mike Gilby—Gilby possesses a mezzo-soprano voice with a wide vocal range, warm timbre and clear diction, which she uses skilfully to unveil her moods throughout the album.

Gilby collaborates with drummer/arranger/conductor Tony Faulkner, a veteran of the British jazz scene. A self-declared Ellingtonian, Faulkner has composed and arranged over a hundred tunes recorded for the BBC's Jazz Club program, where he's conducted his own or the BBC's Orchestra. He's played with significant jazz artists including Thad Jones, Nat Adderley, Art Farmer and Al Cohn.

Gilby's voice and style are distinctive on this setlist consisting largely of standards, with many of them rarely performed by other jazz vocalese divas. Faulkner's clever arrangements bring a fresh and original slant to the material, as well as encouraging strong performances from the musicians, pushing the envelope and making this more than simply a lovely debut.

The disc begins with Bobbie Gentry's classic country hit "Ode to Billy Joe," a tune previously given the jazz treatment by Patricia Barber on Modern Cool (Premonition, 1994) and Oscar Peterson on Motions & Emotions (Verve, 1990). It opens with a vigorous and hard-bopping rhythmic statement by the horns, providing the basis for a tempo that's followed contrapuntally by the drums and percussion. Gilby swings the lyrics and beat with an almost harsh tone, while saxophonist Russell van der Berg responds, adding a spicy dissonant touch.

On an album filled with high points Wes Montgomery's "West Coast Blues" stands out. A duet between Gilby and bassist Russell Pearson, the singer's syncopation approaches scat while Pearson delivers one of his best performances of the set.

Gilby's chameleonic ability to adapt her voice to a song's requirements makes Now That I Am Real a surprising debut. It's clear that she's already found her own voice, bringing a unique perspective to the material that distinguishes her from classic singers like Ella Fitzgerald, Carmen McRae and Billie Holiday, as well as her contemporary peers.

Ode to Billy Joe; In the Heat of the Night; West Coast Blues; Love for Sale; My Heart Belongs to Daddy; How Long Has This Been Going On; Squeeze Me; I Got It Bad; Sunday; Autumn Serenade; The Lady is a Tramp; If I Only Had a Brain.

Title: Now that I am real | Year Released: 2007 | Record Label: Self Produced