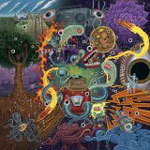 This music takes its time, and only repeated exposure to its delights reveals the depth of its identity. There is an overriding sense of construction behind the entire programme of Now I Understand, which perhaps stems from the fact that it's made up from both real-time and collaged parts. It takes in elements of dance music of the skewed and worthwhile variety, and features contributions from musicians associated with a wide variety of fields.

At first the voices on "Just Kiddin" come across as no more than signs of straining for effect, but then the fact emerges that the listener is perhaps serving their own interests best by disregarding their verbal content; language here is an element of sound, so that the intrinsic qualities of the voices become the primary point of concern in themselves. A similar shift of focus is also useful when it comes to realising how far the methodology here subverts the time-honoured group setup. Thus, though the sax contributions of Tom Hall, Joel Springer and Allan Chase are to be heard on "Quilty," their roles are not as soloists.

Jenifer Jackson's vocal on "A Toy For A Boy" thus comes across as quite stark, and that starkness is an outgrowth of the context her singing emerges from; it might just be a profoundly human point of contact in a wealth of advanced instrumental technique and the happy abuse of technology. Even when things are straightforward in terms of instrumental lineup, as they are on the brief "Luminous Things," they are anything but in terms of aural impact. John Medeski, Mat Maneri and Mister Rourke coax less than obvious sounds out of organ, viola and turntables, respectively. Medeski also deserves highlighting for his wheezing mellotron on "Bass Beat Box," an old sound in a postmodern context.

Mike Rivard's arrangements are slippery things throughout, and they admirably serve the needs of the music in terms of impact. They also don't alter the fact that this is music whose democracy is as profound as that of any piece of free improvisation, for all of the idiomatic differences.