By EYAL HAREUVENI
November 23, 2013
Sign in to view read count 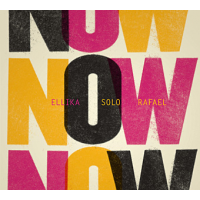 Swedish folk violinist Ellika Frisell and singer and kora player Solo Cissokho, a griot from Senegal, have been playing together for over fifteen years now, finding common ground between the solitary Scandinavian fiddle and West-African kora playing. The two released two albums as a duo, Tretkat Takissaba and Abaraka Tack (Xource, 2002 and 2005) and received the BBC World Music Award. Now adds to this celebrated duo drummer and percussionist Rafael Sida, originally from Mexico, a close collaborator Ale Möler, one of the forefathers of the Swedish world music scene.

The trio weave traditional tunes from the rich Swedish folk and West-African griot legacies, spiced with Latin rhythms in such an organic manner that bridges geographic distances and cultural differences still highlights the strong individuality of each musician. All three are master storytellers who can create detailed and colorful dramas within a short song. Best exemplified in the enchanting "Sanka/Virrvals," a powerful story about an African medicine-woman, now enjoying the beautiful Swedish nature scenery and dancing to the fast flamenco rhythm Buleria or the infectious "Dolo/Porque Se Fue," that quotes a Latin-American hit from the Sixties.

The three wander leisurely between the traditions, back and forth, ornamenting and enriching the other, in an effortless, empathic and supportive interplay, deep in a a new, untimely, long and emotional conversation. The medley "Brurleken Hennes Mor/Väder/Saragode/Sambembe," blends naturally and playfully the songs from the mountain villages in the west of Sweden, the traditional Afro-Cuban chant and West-African dance that blurs all borders and the heartfelt dedication to the great West-African fiddle, riti, player "Djibril," sounds as if he was a Swedish hero. "Saya/Vägen" combines a soulful song of Cissokho in memory of his late sister with a delicate fiddle tune of Frisell, both celebrate the joy of living. They conclude with a beautiful traditional song from Guinea, "Wousse" (love), sharing the innocent and profound connection between these unique musicians.