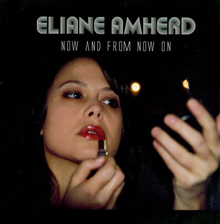 Eliane Amherd creates bright and cheery, easy to listen to; jazz music that's a perfect soundtrack to sunny summer days. She also writes and performs material with a harder edge, darker and raunchier. She's blessed with a strong voice that's capable of intimate romance and bluesy hollers, and she is a fine guitarist, with touches of Marc Ribot's style. All of this goes together to ensure that Now And From Now On is a constantly rewarding album that establishes the young Swiss, who originally performed simply as Eliane, as a musician of talent and potential.

For the most part, Amherd creates a light Latin and Brazilian influenced jazz sound, with some deftly performed pop beats for added aural sunshine. "Let Me Explain" is a perfect summer song, with Amherd's multi-tracked vocals and lightly played guitar mixing with Bill Ware's sparkling vibes. "Now And From Now On" is another slice of upbeat and up-tempo fun, enlivened by Gustavo Amarente's rich and chunky bass line, while "Batucada" is a dance remix of the tune."As If" melds Brazilian rhythm and a rockier guitar sound with a cheekily sexy vocal to once again lift the spirits.

Things get a little too light on a couple of tracks. "Don't Give Up On Me" is a slinky but rather too-smooth blues, "Steady And Slow" is just too laidback and lackluster. These are not bad songs, just nothing out of the ordinary.

It's when Amherd takes a few more risks that she really finds her voice. After the light, Caribbean vibe of the lovely "Me Fe Tan Pliji" and "Feel A Little Sorry For Yourself," the darker, slinkier "Where Is Home" comes as a bit of a surprise. Amherd's guitar has a raw earthiness to its sound—strikingly counterbalanced by Ware's soft and gentle vibes—and her voice is edgy and powerful. On Tom Waits' "Temptation," Amherd combines breathy and seductive vocals with more of her gutsier, Ribot-inspired, guitar playing. Ware responds by hardening the sound of his vibes and the percussion has real bite.

Amherd is a stylish and expressive singer and a guitarist of real quality. Her songwriting is a little inconsistent, but she is capable of creating some intriguing songs. She also produced Now And From Now On. A highly recommended album, from a highly recommended artist.

Now And From Now On; As If; Me Fe Tan Pliji; Don't Give Up On Me; Feel A Little Sorry For Yourself; Where Is Home; Let Me Explain; Temptation; Trust You; Steady And Slow; Batucada.

Title: Now And From Now On | Year Released: 2011 | Record Label: Self Produced