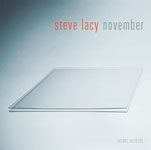 The world of improvised music lost one of the greats when Steve Lacy ceased walking this earth. His music was as singular as that of anyone who has graced that world, and the fact that he chose to communicate exclusively through the medium of the soprano saxophone had the effect of elevating him to a rare position. All the singularity with which he pursued his muse is here on this his last recorded solo recital from 2003.

Lacy's approach to the straight horn had by this time not so much mellowed as grown more considered, with the weight of experience manifesting itself in the manner in which he teased a line out. "Moms" exemplifies this, where repetition of miniature phrases within the line has the effect of creating the kind of tension that Lacy, inscrutable to the last, never resolves with ill-judged emotion. Even in light of such a measured approach, the playful side of his musical personality, a quality he arguably shared with Thelonious Monk, still comes to the fore.

As was Lacy's way, one of Monk's pieces gets an airing here. "Reflections" is melodically so singular that perhaps only a musician who's put in the level of study that Lacy did of Monk's music can truly get something out of it. In this reading Lacy makes the most of the extraordinary intervals even while he gets in some melodic variations of his own. In so doing he pulls off an exceptional feat, reworking the piece to his own design in a manner which isn't so much an overhaul as it is a rethinking. In a sense it's an antithesis of the kind of sterile rereading that repertory can often amount to.

Lacy the composer had a vocabulary of his own too. "The Hoot" is the sound of something teased out of the silence, but then as a soloist he was nothing if not acutely aware of the potential of the silence. Here his control of the soprano's upper registers is as noteworthy as it is anywhere on this program, the notes coming with only a minimal loss of resonance and the same level of consideration as pervades the rest of his playing. Here it's also noticeable how the man had long since given up on striving for effect. Consequently his lyricism comes into its own as but one important facet of his musical personality. It's as effective a way as any of demonstrating that we'll not see his like again.

The Crust; Moms; Tinas Tune; The Door; Blues For Aida; The Hoot; The New Duck; The Rent; The Wammies; Reflections.