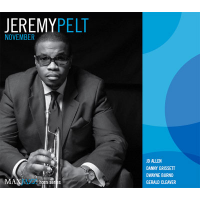 In the same way that Roy Hargrove's Earfood (Emarcy, 2008) updated Lee Morgan's Cornbread (Blue Note, 1965), so Jeremy Pelt's November updates Miles Davis' Miles Smiles (Columbia/Legacy, 1966). If creativity and art can be evaluated on both the vertical and horizontal, Morgan's and Davis' offerings represent horizontal progressions of the art of jazz into new areas, where Hargrove's and Pelt's are vertical elaborations of those previous collections.

Jeremy Pelt (with his band WiRED) last offered Shock Value: Live at Smoke (MaxJazz, 2007), an exploration of the style Miles generated with Live at the Fillmore East (March 7, 1970): It's About That Time (Legacy, 2001). Pelt returns to a fully acoustic format on November, but this music is no more wooden than Miles' groundbreaking second quintet recordings were.

November is a fully realized post-bop suite, a jazz Also Sprach Zarathustra. "Mata" is five-plus minutes of introduction, a free form recital with no resolution. Here and throughout the disc we can hear the spirit of the late Anthony Tillman Williams, who's drumming for Miles Davis, continues to touch all aspects of jazz percussion almost 50 years later.

Pelt's compositions are all tightly angular and anxious, both probing and airy. His trumpet is tart and sweet, the tone very much his own. The choice of JD Allen on tenor saxophone was a deeply thoughtful one as Allen is one of the finest post bop tenor's performing. As a collection, November is a compelling listening experience from beginning to end. Do you miss Nefertiti (Columbia/Legacy, 1967)? Not any more.