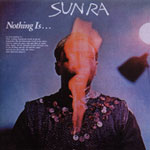 ESP's welcome reactivation continues with this reissue of Sun Ra's Nothing Is. The 1966 live recording has been resequenced to the set list's playing order, and it includes newly discovered performances. The improved package offers a more intimate look at one of Ra's most attractive ESP sessions.

A dramatic build deflates to cubist Harlem with Sun Ra's piano solo intro to the opening "Sun Ra & His Band From Outer Space. Following the chant, the Arkestra blooms in sound and color. Gilmore, Ra, and percussion travel the spaceways; then Ra drops out and Gilmore plays bends, swings, and raw honks, even after Ra returns with staggering chords. Boykins' arco drains the band and rubs solo. Although only formally credited with piano, Ra plays a wonderfully atmospheric and creaky prototype electronic keyboard.

Pat Patrick's baritone leads an expedition into the "Shadow World. An invigorating long run with percussion meets up with the band blowing. The group sings the vaudevillian "The Theme of the Stargazers then blasts off, trombones burning fuel. "Outer Spaceways, Inc. and "Next Stop Mars provide more sci-fi pop fun before a return to the shadows with "Dancing Shadows. Ra plays with his left hand like a futuristic freight train, jumping the tracks and returning with a short phrase by Gilmore. Ra drops out and Gilmore's shadows fly around the rhythm section's fire.

Imagination and "Second Stop is Jupiter continue the space opera, dissolving into the seductive "Exotic Forest. Marshall Allen's oboe snakes through Boykin's hypnotic bass and the ensemble's percussion. The first bonus track, "Velvet, opens with an elegant uptown intro by Ra, then a breezy sharp creased arrangement that Patrick cuts through like a thresher. A well-clipped trombone solo leads back to Ra and the ensemble. "Outer Nothingness, the second bonus track, opens with a group improvisation that ends up with Allen's astounding alto. With minimal percussion, Allen anticipates German powerhouse reedist Peter Brötzmann. The band converses over Jarvis' rattlesnake snare, then leaves him to sizzle solo. A warm closing rendition of "We Travel the Spaceways ends the adventure.

With 25 minutes of quality bonus material, better sound, and proper sequencing, this is the best version yet of one of Sun Ra's best ESP sessions.