Chris Humphrey: Nothing but Blue Sky 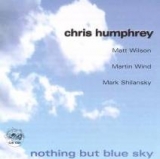 Vocalist/composer Chris Humphrey's release Nothing but Blue Sky continues a recent trend of jazz vocal recordings that feature the vocalist backed sparingly with a piano trio or less instrumentation, without brass or reeds. This enables craftsmen like Humphrey to both explore and display their talents for both singing and, in the case of Humphrey, arranging the music he sings.

Perhaps the best way to describe Humphrey's vocal talent is durable. His voice is neither pretty nor unpretty. It is capable and pleasant, and can hold up under the strain of his progressive and demanding arrangements. Humphrey's reharmonization of Johnny Nash's "I Can See Clearly Now produces a perfectly listenable jazz version that gently incorporates the light reggae of the original with Humphrey's impeccable ability to transform a melody into something previously unheard.

Humphrey is also a master Monk interpreter. "Friday the 13th and "In Walked Bud are dispatched with a muscular thoughtfulness. Humphrey never stoops to blatant technique, blending perfectly his broad range with his harmonic sophistication.

Humphrey employs the hardest working drummer in jazz, Matt Wilson, who provides Humphrey with a sure time and appropriately piquant percussion, particularly on the Latin, "One Note Samba. In a market of flashy Harry Connicks, Pete Cincottis and Tony DeSares, Chris Humphrey offers a stripped down alternative that bares the bones of the songs he interprets, better allowing the listener to understand the composers' intentions.

I Can See Clearly Now; Friday The 13th; If I Should Lose You; Anna's Song (Safe In My Arms); Swingin' 'Til The Girls Come Home; Solitude; In Walked Bud; Lullaby For Jackson; A Love So Strong; One Note Samba; Every Time I Feel The Spirit.