By WOODROW WILKINS
December 14, 2008
Sign in to view read count 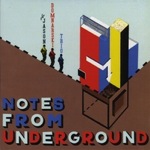 Often with a piano-led trio, the material is from a traditional type of jazz. Not so with The Jason Domnarski Trio's Notes from Underground; this eight-song album takes on orchestral, rock and other styles.

A graduate of Skidmore College, Domnarski is a fixture on the New York scene. His trio won a Downbeat Student Music Award, and he has toured both the United States and Russia, including festivals in Moscow and St. Petersburg. Here, Domnarski is accompanied by John Davis on bass and Dave Mason on drums.

"Shape Shifters" begins on a solemn note, but quickly brings forth the charm. Mason's mix of hi-hats and rim shots help give it an upbeat feel and the melody is captivating though somewhat bittersweet. The tune picks up some measured intensity during the middle passage where the bass comes through more. Mason uses his entire kit during the climax, setting up the main melody before the song's close.

"G Unit" is more of a groove-oriented selection. Adding an electronic pulse to the piano, Domnarski gets into the moment, and at times, the song sounds symphonic. Throughout, Davis and Mason give more than a feel of just being there; they keep time, but add emphasis here and there.

"Detune" is as its name implies, and although the notes aren't flat or even off key, the effects used make it seem as though something's just a bit—different. The pace is lively at first, but slows when Davis and Mason take a break. Domnarski's piano goes it alone at first, but is joined by sounds that bring to mind a subway station. An engaging call and response between the pianist and his sidemen sets up the finale.

Notes from Underground offers a different spin on the jazz trio. With seven original titles and a unique take on the one cover, David Bowie's "Life on Mars," this album is quite different—perhaps a bit other-worldly.