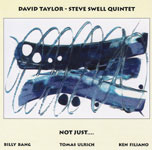 The names of Billy Bang and Ken Filiano will be familiar to many listeners, and Steve Swell has all the chops, though not the reputation, of a Carl Fontana, to whom he may have listened. What Not Just... most resembles is modernist classical music—Bartok, Stravinsky, Berg, Schoenberg—not just in the overall sound, but also the feeling, the seriousness of what David Taylor, Swell and company do.

Free improvisation can be egotistical and self-indulgent. There is no trace of that here. The members of the quintet listen to each other, and the emotion that comes out is honest and communal. Somehow, they are able to make their group improvisation sound composed. Clearly there are parts that really are composed—opening themes, leitmotifs, bass ostinatos and unison passages. Individual composition credits are given for seven of the nine pieces: three for Swell, three for Taylor and one for Bang.

The two remaining are credited to the whole group. One of them, "SOFAR channel," is one of the most impressive tracks on the album. Another appealing moment is Bang's "Down Home," which starts with the violin playing pizzicato on a pentatonic scale, very delicately, recalling Japanese music. Later the pentatonic scale alters slightly and becomes a blues scale, without losing its Asian flavor. Swell's "ETA-Now," "String Theory" and "3 Moon Skies Are Not Rare/Interplanetary Stroll Time" are impressive for their conception and virtuoso performances by everyone, particularly Swell and Filiano.

Of Taylor's compositions, the most effective is "Lament," with a leitmotif carried on throughout and the wonderful arco cello of Tomas Ulrich. CIMP's motto reads "Produced to provide music to reward repeated and in-depth listenings." This one, though not for everyone, definitely meets that standard.