By DOUG COLLETTE
October 8, 2012
Sign in to view read count 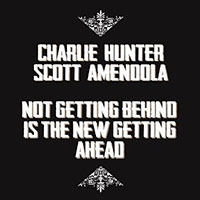 Charlie Hunter is such an original thinker, composer and musician, that his albums are always interesting. But on this wryly and topically titled project with longtime collaborator and kindred spirit drummer Scott Amendola, the seven-string guitarist outdoes himself.

With a rustling flourish from Amendola's kit, the duo slips right into a groove on the languorous, blues-derived "Assessing the Assessors, An Assessor's Assessment." The history of the duo dates back to the 1995 formation of unsung jazz-fusion quartet TJ Kirk (not to mention Hunter's stellar Pound for Pound (Blue Note, 1998) ensemble as well as the Charlie Hunter Quartet), so it should be no surprise they lock right in; but as with the rest of this album, the in-the-moment recording contains no overdubs. Not that it would necessarily need any: Hunter's ability to play guitar and bass parts (almost) simultaneously on his unique instrument invariably make his ensembles sound bigger than they actually are and this two-man alignment is no exception.

Call it slight of hand(s) if you will, but the guitarist's ambidexterity becomes even more impressive on funky, up-tempo pieces like "Rust Belt." He and Amendola know instinctively how to create a groove and dig deeply into it in such a way that the sound just gets earthier by the measure. Another derivation of twelve-bar structure, "There Used to be a Nightclub There," never flounders because Hunter and Amendola anticipate each other's moves, lightening the pace just when it might otherwise go leaden or heavy handed. The pair's shared history is at the heart of their interactions here and the source of its success.

A suitable companion piece to a similarly conceived album of Hunter's with percussionist Leon Parker, Duo (Blue Note, 1999), Not Getting Behind is superior by dint of the conceptual theme that runs through all ten songs, including a tribute to one of Charlie Hunter's musical heroes, "Blind Arthur" (Blake). Tunes like "Ghost Mall," "Economy with Dignity" and the cryptically titled "Those Desk's Aren't Going to Clean Themselves" are all inspired by Hunter's tour travels around the country and his observations of how its economic landscape has changed.

No pretentions whatsoever, however, afflict the tunes most directly reflective of that idea, such as the bouncy title track or "The Wizard Pounds the Pavement." The musicianship itself is so provocative that Hunter and Amendola end up making a bold and memorable statement mirroring our times in more ways than one: recorded directly to tape as the players listened to each other live, the sound as co-produced by Hunter and engineer Dave McNair has a physical impact that reinforces the contemplation its themes encourage. It is the axiom "less is more" in action.

Replete with as much intelligence as imagination, the infectious joy in this music, particularly as it concludes in such sprightly fashion on "Economy with Dignity," is the crowning touch to Not Getting Behind Is the New Getting Ahead.

Assessing the Assessors, An Assessor's Assessment ; Rust Belt ; There Used To Be A Nightclub There ; The Wizard Pounds the Pavement ; Not Getting Behind Is the New Getting Ahead ; Ghost Mall ; Blind Arthur ; Those Desks Aren't Going to Clean Themselves; Dot Dot Dah; Economy with Dignity.

Title: Not Getting Behind Is The New Getting Ahead | Year Released: 2012 | Record Label: Ia (independent Artists)