Dave Holland Quintet: Not For Nothin' 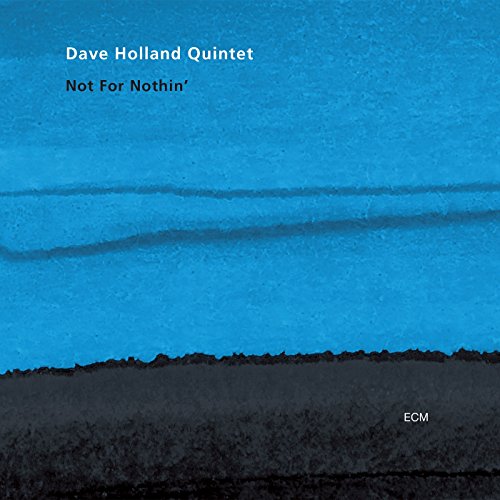 Usually, records led by bassists rely on a rock-solid rhythm section. Not For Nothin', Dave Holland's latest quintet effort, certainly presents no exception to this rule. However, the magic behind this disc comes from the fact that every musician plays in the rhythm section at times, and every player also contributes to melody and harmony as well. It's a rare, organic integration of roles. And the pieces fit together very nicely.

Dave Holland has been all the way through the jazz mill: from 1970-era Miles Davis fusion, through early '70s experiments with Anthony Braxton; a series of '80s collaborations with Steve Coleman; and most lately, his current working quintet. With all this experience under his belt, Holland's musical palette is kaleidoscopic to say the least. With respect to all these colors, Holland cites some wise advice he once received from collaborator Sam Rivers: "Don't leave anything out, use it all." And that's exactly what Holland does on Not For Nothin'. There's a touch of funk here, some Latin grooves there, more than a little swing, plus nameless experimental work in and out of the pocket. The compositions on this record, by Holland and the members of his quintet, reflect a general sense of musical democracy. Certain players might hold back and work up vamps while the rest extemporize; then roles trade and the quintet moves on to new territory.

The distinctive features of Not for Nothin' —as well as the two preceding records by the same quintet—include thedramaticallyversatile drumming of Billy Kilson (who faces a monumental challenge even just sitting next to Holland!); the coherent and often bravely expeditionary interactions between Chris Potter and Robin Eubanks; and the somehow pacifying mallet work of Steve Nelson. Nelson plays both vibes and marimba here, and he's the most obvious example of rhythm combined with harmony and melody. But listen to the other players, and you'll find that to be more a rule than the exception. It's clear that Holland fuels this effort (and his playing remains as vibrant as ever), but the sense of cohesion among the five players on Not For Nothin' insists that this document is truly a group effort.

Only one criticism: at times, the group seems a bit restrained. This quality seems to reflect the compromise needed to cram nine tunes onto one record. Given the opportunity to stretch out in live performance, the possibilities of this Dave Holland Quintet ought to be nearly limitless. "Use it all"... indeed!

Global Citizen; For All You Are; Lost And Found; Shifting Sands; Billows Of Rhythm; What Goes Around; Go Fly A Kite; Not For Nothin