Joe Martin: Not By Chance

By GREG CAMPHIRE
September 28, 2009
Sign in to view read count 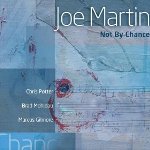 Bassist/composer Joe Martin has assembled an all-star cast for his second release as a leader, Not By Chance. All of the tunes, with one exception, are written by Martin, and his interplay with pianist Brad Mehldau, saxophonist Chris Potter and drummer Marcus Gilmore is masterful. The group explores rhythms through unending variations, creating instant responses with minute details and close attention to structure.

But while the interaction is deep, the band doesn't immediately distinguish itself as particularly unique; it could be any current group on the New York scene today. Songs like "Semente," "Far," "Not By Chance" and "The Stoic" are all virtually indistinguishable. They share similar characteristics in having a straight-eighth-note feel at a medium tempo, stretching into eight-minute territory while lacking a memorable melody.

Similarly, "In the Meantime" is another case where the players' expertise allows them to make great music out of anything, but the composition feels more like an academic exercise than a lyrical melody based in emotion. Nonetheless, while the tune's angular, blues-flavored bounce is subtle and unassuming at first, it ultimately stands out in its dedication to tasteful swing.

Midway through the album is where the band really hits its stride. "A Dream" features a patient melody, taking its time to evolve in an impressionistic, rubato mode. Potter displays a wealth of ideas, and Gilmore's supple touch on cymbals creates a perfect cushion. "Once Before" has the loping, mid-tempo vibe of the classic John Coltrane Quartet; Martin's band doesn't have anything to prove, they just roll out a thick carpet of 4/4 swing for Potter to get down home and soulful.

Throughout the set, it's good to hear Mehldau stretch outside the familiarity of his own trio's concept; but sideman status buries his singular voice in the mix. Still, he and Potter especially have an interesting rapport in their twin investigation of harmony, sparring playfully on tracks like "Caché," which manages to mesh a sentimental vibe with an oddly timed rhythm.

A version of Jaco Pastorius' "The Balloon Song" is the record's highlight, with slick unison playing from Potter and Martin on a construction that recalls Coltrane's "Giant Steps." It splinters into fragmented meters, as the musicians play freely off pure tone and energy. Potter has an original bass clarinet sound here, distanced from obvious heirs like Eric Dolphy and Bennie Maupin.

It's telling that "The Balloon Song"—by far the shortest cut at less than four minutes, and the only one not composed by Martin—is the most effective in capturing a strong melody while retaining the warmth of the players' sensitive delivery. While Martin's own compositional skills are admirable, it's no less of an artistic accomplishment for him to sing his own song through the voice of another writer. The promise of hearing such a strong quartet tackling other tunes—those of other writers, or more developed ones by Martin—tantalizes the imagination in anticipation of the bassist's next episode.

Semente; In the Meantime; Cach