By BEV STAPLETON
January 20, 2006
Sign in to view read count 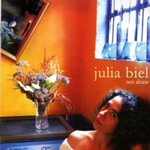 This isn't a jazz record, but I imagine it will arouse much more interest from jazz enthusiasts than many of the recent crop of vocal albums that have earned "jazz is back" credits in the mainstream press.

Julia Biel has been working with the musicians of the F-IRE Collective on a number of their recent projects. Those of us outside London have only caught brief glimpses of her on recordings by Polar Bear and Oriole. Not Alone places her at centre stage with a collection devoted mainly to songs composed with guitarist Jonny Phillips.

The light, breezy nature of earlier songs like "Souvenir" and "By the Light of You" is not too far away from the more melodic contemporary UK rock bands. What gives the album its own flavour is its instrumentation, which owes more to Brazil than Coldplay. F-IRE places attention to rhythmic complexity at the heart of its music, and Biel seems to share this very un-English preoccupation.

The colour of the record is dominated by acoustic instruments—South American or Spanish-toned guitar, string bass, cello, and woody-sounding reeds. The short instrumental "Interlude" combines guitar and fruity bass clarinet, also moving the record into darker territory. The version of Jobim's "Falando de Amor" sees voice and cello interweaving over a mournful guitar backing. "Uncomfortable Somehow" has a beautiful free-form improvisatory opening that guarantees instant rejection from daytime radio playlists, before shifting into a touching minor-key lament. Sketches of Spain may not have been in the musicians' minds when they recorded this CD, but it inhabits the same sound-world as the second side of that great record.

Latin music enjoys an underground popularity in Britain that bursts into the foreground every once in a while. "Rhythm of the Treetops," with its swaying samba feel, could well be a hit, should there be an Everything But the Girl-like revival in the immediate future.

However, the tour de force of the album is the closing "Where is She Now?" Piano, acoustic bass, percussion, and tasteful electric guitar unfold a final melancholy mood where Biel's voice moves from its comfortable, husky, midrange to a spine-shivering sustained high note, perfectly judged at the point of a delicious key change. It's a track you'll immediately want to hear again.

Biel's voice is far from conventional. When I first listened to the album, my mind was grasping for a half-remembered comparison. That eventually revealed itself to be Rickie Lee Jones, and the album as a whole has a similar ambiance to the latter's wonderful 1993 Traffic from Paradise.

At a time when the major record companies are fixated on finding more young singers who can fit into the Dean Martin/Frank Sinatra nostalgia trip, it's a joy to hear a vocalist going her own way with such determination and using instrumentation that owes nothing to current fashion. Alongside Christine Tobin, Julia Biel is one of the most interesting younger vocalists in Britain.

Shhh...; Paradise; Souvenir; By the Light of You; Interlude; Choro; Uncomfortable Somehow; Rhythm of the Treetops; Where is She Now?; History ("hidden" track).