By DAN MCCLENAGHAN
September 11, 2009
Sign in to view read count 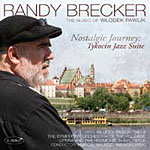 Trumpeter Randy Brecker's jazz credentials are of the highest order. The Brecker Brothers, the group he co-led with younger brother/saxophonist Michael Brecker, was one of the most successful jazz/funk/fusion groups of the 1970s and '80s. But jazz snobbery/elitism never ran in the family. Brecker has played and recorded with seemingly everybody, from the original Blood, Sweat and Tears on its debut, Child is Father to the Man (Columbia Records, 1968), to albums by Bruce Springsteen, Lou Reed, Dire Straits and Aerosmith.

With a funk/fusion background and lots of work in the rock world, Nostalgic Journey: Tykocin Jazz Suite, a classical-leaning "jazz with strings" outing, is something of a surprise.

The story of Michael Brecker's tragic and untimely death in 2007 from leukemia, and the search for a blood marrow donor, led to tracing the Brecker family roots to Poland's Tykocin area. The ancestral search was aided by Polish pianist/composer Wlodek Pawlik, whom Randy met in Germany in 1994 when Pawlik played with the Western Jazz Quartet. That meeting—and the subsequent quest for Brecker bloodlines—ultimately led to Pawlik's writing on this superb meeting of classical and jazz worlds.

Though Brecker's name is the big one—profile-wise and physically, on the CD cover—the smaller lettering beneath his name states "The Music of Wlodek Pawlik." This suite, where Brecker blows with clean precision in front of Pawlik's trio and the Symphony Orchestra of Bialystok's Podlasie Opera and Philharmonic, feels and sounds like serious art, more so than any number of great "jazz with strings" recordings on the shelf. It's less jazzy and more attuned to the classical side than Charlie Parker with Strings (Verve Records, 1950), the grandfather of the genre; Paul Desmond's Desmond Blue (RCA Victor, 1961); or Art Pepper's Winter Moon (Galaxy/OJC, 1980).

The journey begins with a three part introduction, with the unaccompanied Pawlik painting delicate teardrops on "Movement 1." He is joined by a subtle backdrop of strings on the inward "Movement 2," leading into an enlivened, driving symphonic sound on "Movement 3."

Brecker and Pawlik's trio mates, bassist Pawel Panita and drummer Cezary Konrad, make their appearance on the title cut, a beautiful tune that showcases Brecker's striking tone and deft navigation of the composition, as well as Pawlik's intricate pianism and tight trio interplay.

The upbeat "Let's All go to Heaven" possesses the jazziest mood of the set, with the trio and Brecker sounding especially inspired and in the groove. "No Words," preceded by another gorgeous piano intro, is a soft ballad, the sort that Chet Baker was so good at delivering. Brecker does his own tangy, heartfelt delivery, backed by just the right subtle touch of string accompaniment, with a searching piano solo slipped in the middle. "Magic Seven" marries classical grandeur with jazz guts and fire, and "Blue Rain" gets into a jazz grooves on the upbeat closing to this musical journey.

Nostaglic Journey: Tykocin Jazz Suite is a magnificent CD that presents both a new side to Randy Brecker and a fine introduction to Wlodek Pawlik.