By EYAL HAREUVENI
August 20, 2014
Sign in to view read count 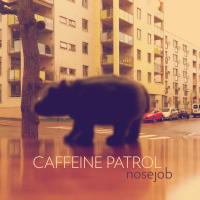 The jazz department of the NTNU university in Trondheim, Norway keeps presenting gifted and opinionated musicians that challenge conventional perspectives on genres and styles. The new power trio Caffeine Petrol—guitarist Gudmund Bolstad Skjær, who wrote all the trio pieces, bassist Fredrik Gundersen and drummer Martin Sandvik— demonstrate how any neo-jazz-cons attempt to frame jazz aesthetics in clear, linear, historical or geographical musical boundaries is futile. These young musicians do not bother themselves with such intellectual abstractions. They focus on the music and its good vibrations.

The trio describes its debut album Nosejob, released on the new label Just for the Records, as absorbing elements from Led Zeppelin, Marc Ribot, Bill Frisell, Tortoise and Deerhoof but do not try to replicate any of these seminal influences. The DNA of Caffeine Petrol is comprised from aggressive guitar riffs, restless and powerful interplay and driving, infectious rhythms, but spins its basic ingredients with surprising spices.

The trio does not attempt to control its muscular playing and brings it close to a chaotic mayhem at the climax of "Biltema." The pastoral, country-tinged "Boveskov" suddenly spins into distorted, atmospheric terrains and the heavy bluesy guitar riffs of "Hoosegow" highlight Skjær charismatic leadership. The volatile rhythm section of Gundersen and Sandvik keeps the tension of "Arne is Typing" through its constant shifts. "November" is the only ballad here, but not one that is delivered to an obvious, emotional catharsis but one that spins its climax toward a singing, country-like guitar riff. The title piece is almost a rhythm n' blues piece by the book but one that is decorated with a strong, melodic theme that may easily carry a pop song.

Good vibrations, no need for caffeine to assure that conclusion.