By BRUCE LINDSAY
June 2, 2010
Sign in to view read count
Norwich Jazz Party
Norwich, UK
May 1-3, 2010
Norwich may well be one of the loveliest cities in Britain, but the May Day holiday weekend was wet and miserable, volcanic ash from Iceland was still threatening travel plans and even the exciting prospect of a General Election the following week was failing to lift the spirits. Thankfully, the fourth Norwich Jazz Party managed to achieve what the General Election couldn't—its three joyous days of exceptional mainstream jazz brought smiles and good cheer to its enthusiastic audience. 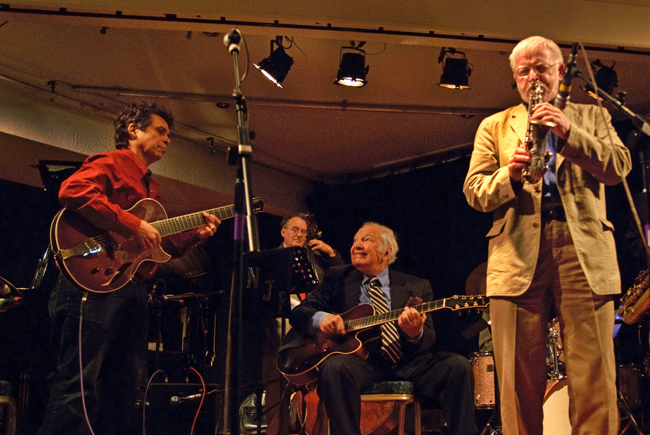 Howard Alden, Frank Tate, Bucky Pizzarelli, Jim Galloway The 2010 Jazz Party was dedicated to three great and well-loved jazz musicians whose deaths had sadly occurred in the months leading up to the event—Sir John Dankworth, Jake Hanna and John Bunch. The Party featured around 30 musicians from Britain, the United States and Italy, playing in combinations ranging from solo to 14-piece big bands. Many were making return visits but there were also some first-timers, including the exciting trombonist John Allred and the irrepressible singer, guitarist and raconteur Marty Grosz, whose double act with reed player Ken Peplowski was a real delight.
The Jazz Party gave the musicians a chance to play in new combinations and to explore fresh collaborations—opportunities the players all grabbed with enthusiasm, creativity and good humor. Occasionally things went a little awry, but such minor failings were taken in stride by the players and by the audience. More often than not the unfamiliar mixtures were a success, leading to some surprising and exhilarating performances.

Two outstanding performances came from musicians at the opposite ends of the age spectrum. The young Italian pianist Paolo Alderighi, making his first appearance in Norwich, and the venerable guitarist Bucky Pizzarelli both played exceptionally across the weekend, creating some beautiful music. Alderighi was a late addition to the Party, replacing and recommended by his fellow Italian Rossano Sportiello. He has a delicate and precise playing style for the most part although, as he demonstrated on a version of Fats Waller's "Handful of Keys," he can also play punchy and driving rhythms as well. Alderighi was a popular accompanist and rhythm player in the ensemble sets, but his brief solo spots were especially effective and showed a real maturity of expression. Pizzarelli is now in his mid-80s but showed no sign of slowing down or of losing any of his obvious love of playing. During a small group set devoted to the music of Django Reinhardt Pizzarelli's lovely version of "Nuages" was one of the most affecting performances of the weekend, while his short trio set with bassist Giorgos Antoniou and drummer Steve Brown was also delightful—as evidenced in the smiles of delight that filled Brown and Antoniou's faces for the entire time. 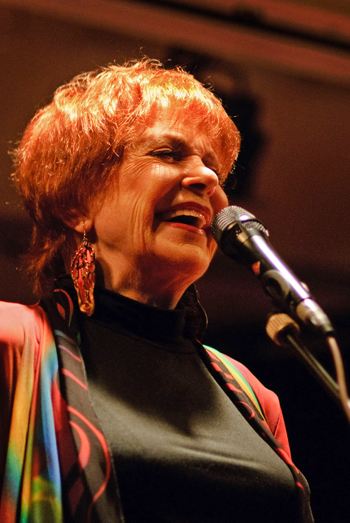 Once again, some of the Party's most enjoyable playing came from those relatively unsung heroes of jazz, the drummers and bassists, whose musicianship was of a consistently high standard. Individually, their styles ranged from the high-energy and exciting playing of drummer Joe Ascione to the more laid back approach of bassist Frank Tate or drummer Bobby Worth. Ed Metz, Jr. contributed a powerful and inventive drum solo while duetting—or perhaps that should be duelling—with the driving rhythm guitar of Pizzarelli. Nicki Parrott brought her bass to the front of the stage to take lead vocals on a set of jazz standards while Tate's solo on "Willow Weep For Me" was one of the loveliest of the weekend on any instrument.

Vocal performances were much in evidence across the weekend. Annie Ross (above)—accompanied by Antoniou and Brown as well as by her regular New York collaborators pianist Tardo Hammer and brass player Warren Vache—performed three different sets, and while her voice lacks its previous impact she remains an arresting on-stage presence: her performance of "Lush Life," accompanied by Hammer, was a Party highlight. Trumpeter Enrico Tomasso and soprano saxophonist Jim Galloway also demonstrated their vocal abilities on one or two tunes: the latter on "Everybody Loves Saturday Night" during a tribute set to the late clarinetist Sandy Brown.

Themed sets, devoted to the work of a particular composer or musician, saw the lead musicians often creating new arrangements or new instrumental line-ups to bring freshness to familiar work. "Silver Collection," led by saxophonist Katie Brown, featured some intriguing re-workings of Horace Silver songs, including "Summer in Central Park" and "Filthy McNasty," while Hammer produced a similarly inventive set of Tadd Dameron tunes. "John's Bunch," led by Scott Hamilton, was a poignant tribute to the late pianist, with John Pearce on piano and Hamilton on tenor both playing with exceptional warmth.

Audience numbers were up from the previous year, despite the world's financial problems, and bookings were already being made for 2011 even as the Party was in full swing. Jazz Parties may be a rarity here in the UK, but the Norwich Jazz Party builds on its success year after year, keeping the flag flying for mainstream swinging jazz.