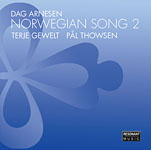 Norwegian pianist Dag Arnesen continues to mine the rich tradition of Norwegian folk and classical music on Norwegian Song 2, the logical follow-up to the acclaimed Norwegian Song (Resonant Music, 2008). While the approach might seem formulaic, it's really no different than American musicians who mine the Great American Songbook. It's all about taking music that's part of their DNA and reworking it for a more open-ended, improvisational context, and that's just what Arnesen, bassist Terje Gewelt and drummer Pål Thowsen do on this collection of 11 songs, largely taken from, for most, unfamiliar but lyrical folk melodies, with two culled from classical composer Edvard Grieg.

While the trio doesn't exactly swing, it's remains firmly planted in the modern mainstream, with rhythmic references to light bossa on the gently swaying "Eg rodde meg ut på seiegrunnnen (Strilevise)," soft, brush-driven groove on "Blåmann, Blåmann" and, on "Dalebu Jonson," a brief but repeated reference to Miles Davis' enduring "All Blues." Still, as much as "Blåmann, Blåmann" possesses a soft contemporary pulse, it also demonstrates Arnesen's ability to, in the subtlest of fashions, pay homage to the innocent roots of this well-known Norwegian children's song.

As with the first disc, Arnesen and his trio approach the music with an economically nuanced approach that, again, draws direct reference to piano Tord Gustavsen's trio and its avoidance of overt virtuosity on albums including Being There (ECM, 2007). But Arnesen has been around considerably longer than Gustavsen, dating back to the early '80s (at least), and so it's possible that he's been a source for Gustavsen's whisper-like approach to group interaction. But while Gustavsen has been gradually expanding his dynamic sphere like a drop of water creating ever-expanding circles in a lake, Arnesen demonstrates greater energy and tempo on the samba-like "Kjerringa med staven / The Old Woman with the Staff."

Irrespective of the trio's approach to individual songs, lyricism and approachability are paramount, making Norwegian Song 2 a fine sequel to Norwegian Song. Good music is where you find it and, when it comes to jazz, should not be limited to the American tradition and its admittedly expansive body of reference material.