By JOHN KELMAN
July 27, 2010
Sign in to view read count
July 25: Ending the Trip with The Atlantic Road

With Molde Jazz 2010 over, and the town demonstrating almost no signs of it the following morning—most of the kiosks down from the main street, there was one last thing to do. Atlanterhavsveien (The Atlantic Road), about 50 kilometers outside of Molde, is an award-winning stretch of road that connects the island of Averøy to Vevang, Eide, on the mainland; by extension, the road connects the cities of Kristiansund and Molde.

Driving through the mountains outside Molde to reach the road, it becomes clear just how spread out the population of Norway is. Not a mile goes by where there isn't some sign of life, whether it's a collection of homes or a single hunting shack, which is normally on the property of the owner, signifying that there's a home somewhere else on the land. Rolling mountains, ranging in height from a few hundred meters to nearly two thousand, provide a wealth of hiking and rock climbing opportunities for a population connected to nature in ways that North Americans, as a general rule, are not. Even in the midst of summer, some of the peaks still show snow near the top, and skiing is still possible on some of them. 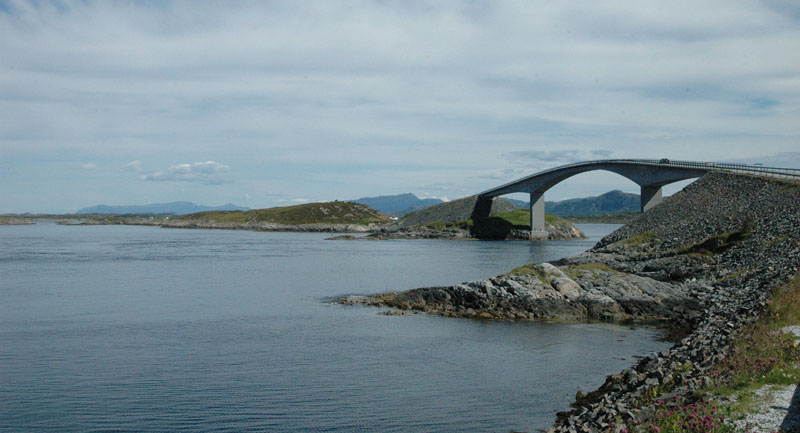 But all things change and become even more impressive when the bridges that span the islands begin to loom in the distance. Approaching the first bridge, it looks more like a ski jump than a bridge, but that's just perspective. Begin to drive on the bridge, and the natural curve that shapes the bridge into a hill that mirrors the rolling scenery around it, and the vista opens up. With the entire three-week Norwegian Road Trip coming to an end, it's hard to pick where the most beautiful spot in Norway is, in a journey that began on the east coast and is ending on the west. But with 222 mountains surrounding it, and The Atlantic Road not far from it, Molde and its surrounding area certainly jumps out as one of the country's most appealing locales.

That there are prisons, factories and other signs of normal habitation only proves how well the Norwegian culture aims to integrate with its geography. There are urban issues in larger centers like Oslo, to be sure; but overall there's a certain sense of harmony that's tremendously appealing. And there's another truth: that it's impossible to separate the music of a country from its culture, and from its geography. It's a certainty that were Norway a different country, with a different climate and different latitude—as opposed to a latitude where, only a little farther north than Molde, you're into the Land of the Midnight Sun—the music that comes from it would absolutely be significantly different.

Music is, after all, a fundamental reflection of who we are and where we live, and if three weeks traveling Norway have taught any one thing, it's that these things are, indeed, absolutely inseparable. With Kongsberg, Oslo and Molde now in the past, the hope is to try and retain some of the scenery, the unique cultural perspective and the vibe that has turned Norway into a country with a music scene like no other.