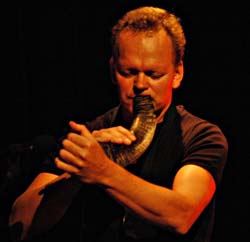 With NORCD, saxophonist Karl Seglem has created a record label that may be stylistically far-reaching but, regardless of the context, finds new ways to explore the marriage of improvisation with the Norwegian folk tradition. In addition to his own recording—including the contemporary sounding Nye Nord, acoustic setting of Norskjazz.No (2009), more outré Skoddeheimen (2010) and his longstanding improvising duo with percussionist Terje Isungset—Seglem has fostered new groups like Eple Trio, whose Widening Sphere of Influence (2008) was one of that year's best new surprises.

"I started quite early, in a marching band," says Seglem, "playing all these strange brass instruments like tenor horn and alphorn, and then the sax guy left the marching band to go to school, and he said 'can you play this?' [tenor saxophone]. I think I was very happy about this, and I got it in my hands, and a sheet telling me where to put my fingers [laughs], and then I had to go home and learn it. I was a very big fan of rock and pop music like Pink Floyd, and American stuff like Frank Zappa and Little Feat—all these bands I got to know from older friends, And then I went to school—Folk School, they called it—and then I got my first teacher, Olav Dale, in Bergen. I went to this school for two years, and it was very nice, it had no grades. It's up to yourself what you do with it, and you don't get graded for it. Many people do nothing with these years, other than thinking about what they're going to do with their lives; I worked hard, I practiced and learned a lot of theory.

"This was back in the late 1970s," Seglem continues. "Then I went back to my hometown and taught marching bands and also went to industry because they had a big aluminum factory. So I started working there, and after six months, when you can finally get permanent employment, I quit and went to Bergen, where I lived for thirteen years. I started to play a lot in big bands, and I started to make my own bands. I met Terje Isungset in 1987 and we started to play together in the duo Isglem, where we did a lot of improvisation and I played a lot of American traditional jazz standards; this was through the '80s. And then I began going back to my own heritage musically; I started to dig into the archives, finding folks tunes. I was never very happy with copping the American tradition; I wasn't particularly good at it."

Seglem's diving back into the Norwegian folk tradition also meant picking up unusual instruments like the goat horn—though, as Seglem proved at his 2006 performance at Punkt in Kristiansand, where he played it through a variety of looping and sound processing devices, that he was no purist. "My first recording with goat horn was with Isglem [Seglem's duo with Isungset], on the third record. I got one by accident; after a concert one time, a farmer came to me and said, 'you should play this,' and handed me a goat horn. The first years I used it more as an effect, to get other sounds; it was not especially well-made, so I sent it to a guy in Sweden, and it came back as an instrument and I started to work with it. It's been maybe 14-15 years that I've been using different kinds of goat horns."

The horn is made into an instrument by knowing where to put the holes, not unlike a flute or recorder, but with a curved instrument where each one is different, knowing where to put them is an art in itself. "There's one man in Norway who works with flutes and horns, and he makes very nice instruments," says Seglem. "Last year I got an antelope horn; it's not very big, but it's more bowed and it has only one hole, so you have only four or five tones."

The subject of how Norway's distinctive music evolved in jazz, where there really was no tradition to speak of before the 1960s and the emergence of ECM's big four—saxophonist Jan Garbarek, guitarist Terje Rypdal, bassist Arild Andersen and drummer Jon Christensen—is one that crops up, in some way, with most Norwegian musicians, but Seglem's particular affiliation with his country's folks tradition gives him special insight. "Garbarek, Andersen, Rypdal...all these guys, they have been very clear about going their own way, trying to improvise in other ways [than the American tradition]," Seglem explains. "I was lucky, because in 1990 I met this hardanger fiddler named Håkon Høgemo; was raised only 12 kilometers from where I was born and raised, but I didn't meet him until I was 20 years old. He was playing this fiddle in relative isolation, but he was a big star in the folk community, which I knew, but I didn't know how big he was until I started to work with him.

"I was commissioned to write a piece," Seglem continues. "I got a cassette from him and I made a bigger tune out of it. He only played his traditional tune, but there were three or four of us who worked on it. I've been working with him for over twenty years now, and it's made me the saxophonist that I am—also the goat horn—and this is quite rare, there's nobody else doing a hardanger fiddle/saxophone duo; it's quite special. I was really amazed, the first time we played together, because the overtones of the two instruments fit together so well. I've learned many traditional tunes from him, and he's stretching himself because of working with me; he's very traditional, and I think he's the best hardanger fiddler there is, because he's very focused on sound, not so much on rhythm or virtuosity. I released his solo album, Solo, in 2000 and it won the Norwegian Grammy. "

Seglem started his label, NORCD, in 1991, and it will release its 100th album in 2010. "I was living in Bergen when I started NORCD, and there were a lot of musicians who weren't getting record contracts then, and I didn't either—I sent my master tapes to all these companies and got no answer. I got some help from Jon Larsen, the guitarist, because he'd already started the Hot Club label—I did my first CD for that label—so he gave me some tips and hints, and I decided I would release it myself. And then a lot of musicians in Bergen started coming to me, asking me how I did it, and can I help them, and I did. Suddenly I was running a record label."

Some years are busier than others, but in the past year Seglem has been particularly busy with NORCD; normally he releases four or five discs a year, but recently he's put out more; no small challenge for a one-man operation. "I think, perhaps, that 2011 will be a year that I just wait and see what happens," Seglem says. "We are making a catalogue now, of all the releases; a printed one. It will have the cover and basic information about each title. I think it will be very useful for me, to be able to show others the importance of the label; there are a lot of musicians who have done one or two records with me and then moved on to bigger labels like ECM, or their own labels; I think NORCD has been very important for a lot of people."

Seglem has, more recently, been working with Eple Trio, releasing Norskjazz.No, an album that Seglem said, at the time, fulfilled a longtime desire to make a record with a traditional jazz lineup—saxophone, piano, bass and drums. But, no surprise, the album is far removed from conventional acoustic quartet; it swings, but not in the traditional way; and the use of space, the attention to the purity of each and every note, and a kind of dark, late night melancholy fit it far more easily within the Norwegian sphere. "I think it was important for me to do that album" says Seglem. "Playing with younger musicians and to work with these compositions—some I wrote 25 years ago—it was a very nice thing to do. It's great to play with them live; we keep it clean, open, and minimalistic."

Working with an existing trio means there's an inherent chemistry brought to the table, but there's still the challenge of making an album that doesn't simply sound like Eple Trio with a guest saxophonist. "I think the writing helps a lot. When I heard Eple Trio for the first time, I thought it was something very, very special," Seglem enthuses. "The trio sound was like nothing else I'd heard, and so when I got the idea to do this record I thought immediately of them; other groups could have done it, but it wouldn't have become the record it is."

Seglem has a new album due for release, working with the same quintet as he used on urbs (2007). But while they continue to use the studio to shape the music with overdubs and other approaches that are not reproducible in a live setting, Ossicles has more of a live feel; a more accurate representation of how the group sounds in concert. "The tracks were played live, as a base," says Seglem. "It still has a lot of overdubs and studio things, but recording the bed tracks live makes a big difference. Ozella [the German label that distributes NORCD internationally] says that they've been waiting for this. Four of the tracks were recorded in Germany, and rest were recorded here, in Oslo. I'm very happy with it; it's more powerful, there are 11 songs ranging from solo to full group, with two or three percussionists and a fiddler, with saxophone and goat horn in the mix."

Ossicles will be released in the fall, to coincide with a tour of Norway and Germany. Where NORCD and Seglem goes in 2011 is anybody's guess; but it's a certainty that his distinctive blend of jazz and folk sensibilities will be well worth watching for.

Coming Up: More time in Oslo; A Visit to Rainbow Studio and Jan Erik Kongshaug.