Norwegian Jazz 101b: JazzNorway in a Nutshell 2010

The problem with a festival running simultaneous shows in three rooms means that either choices have to made, or it becomes necessary to leave one performance early in order to catch parts of another. With two guitarists as important as Stian Westerhus and Eivind Aarset playing at the same time, the only possible choice was to leave one early and show up at the other part-way through its set. Aarset, who was the subject of an extensive AAJ interview earlier in 2010 to coincide with the release of Live Extracts (Jazzland, 2010), was in Sardinen with a double-drummer version of his Sonic Codex group, and missing the first part of his performance was as difficult a decision as leaving Westerhus' set, as both were thoroughly compelling in their own distinct ways. 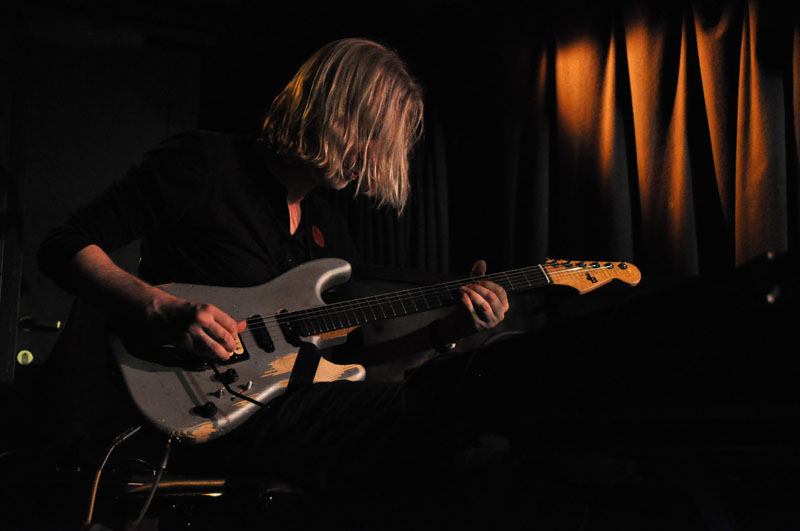 Drummer Wetle Holte has been with Aarset dating back to the guitarist's second album, Light Extracts (Jazzland, 2002), while bassist Audun Erlien—heard with trumpeter Mathias Eick a couple nights back—joined up with Aarset at the time of Sonic Codex (Jazzland, 2007). Drummer Erlend Dahlen, also heard with Eick, has been touring with Aarset's larger groups—this quartet and the expanded, six-piece Sonic Codex Orchestra—for the past couple years. During Aarset's set, the two drummers came together for some powerful in-tandem kit work, but they also contributed strong individuality as well. As in his performance with Eick, Dahlen added bowed saw to the mix—as well as vocals—during the powerfully balladic "Still Changing." He also played steel drum and some additional tune percussion, as did Holte, who contributed some additional electronics to Aarset's expansive aural landscapes.

Seeing Aarset and Westerhus back-to-back only emphasized how innovative, yet completely different, the two guitarists were. Aarset's approach to sound was equally forward-thinking, but his playing—despite use of devices like an eBow to create flowing, sustaining melody lines and gently tapping the body of his guitar to create sounds rife for processing—was more overtly guitaristic, as he used unusual voicings and odd intervallic leaps in his melodies to create music that was unmistakable and unique, yet still closely aligned to conventional concepts of time, melody and harmony. He proved a deeply lyrical player as well, capable of stunning virtuosity, but largely focusing, instead, on soundscapes and building a collective ensemble sound that combined elements of jazz and progressive rock...even, during the angular "Electromagnetic," hints of King Crimson-like Nuevo metal. 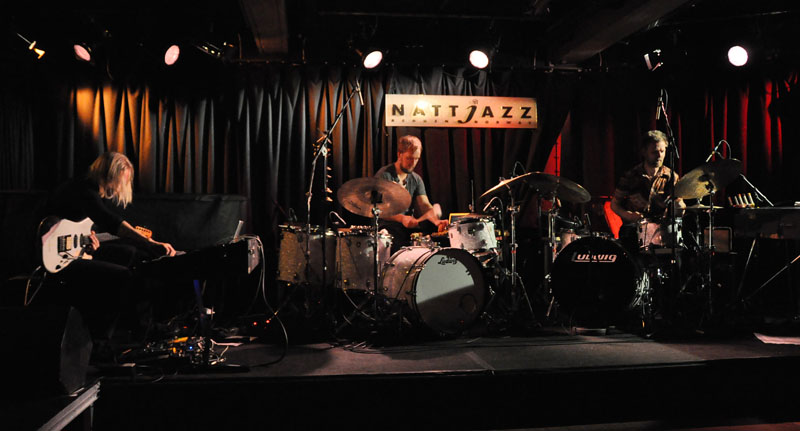 Like Aarset the person, Sonic Codex's music took its time to unfold, gradually revealing more as it built from near-ambient atmospherics to ear-shattering crunches—where what was coming from the stage was so dense that it was hard to imagine so much sound coming from just one guitarist. Erlien created a solid anchor when the music demanded it, but wasn't afraid to kick in a distortion pedal and deliver harshly overdriven lines and powerful in-the-gut sonics. Aarset—who still plays in duo and other special projects with Molvær as well as with trumpeter Arve Henriksen and live sampler Jan Bang—is known primarily as a sound sculptor in his extracurricular activities. In his own work, while it's a relatively rare occurrence, he does break out with some guitar pyrotechnics here and there, as he did during the slow burn of "Sign of Seven." With a mad scientist's array of foot pedals, and even more on a table in front of him along with a laptop computer, Aarset's command of sound and intimate knowledge of gear yields new sounds as spontaneously as the lines and chords he plays. Live Extracts is a terrific document of Aarset's two working bands, but even it can't capture the visceral energy and expansive sounds that this guitar anti-hero proves capable of in performance, time and time again.

With a number of JNiaN attendees leaving early on the morning of May 29, many goodbyes were made late in the evening at the Key Club, though the general consensus has always been that it's never goodbye, but simply "until next time." Those who remained on the 29th, leaving the following day, were treated to one more programmed event, courtesy of JNiaN—a repeat of the 2009 trip that took people, by boat, to an island off the coast of Bergen, to Cornelius på Holmen. A restaurant with a simple premise—only serve food fresh from the surrounding waters and lands—Cornelius på Holmen provided one last opportunity for everyone to get together over a meal, talk about what they'd seen and heard, and make some plans for keeping in touch. 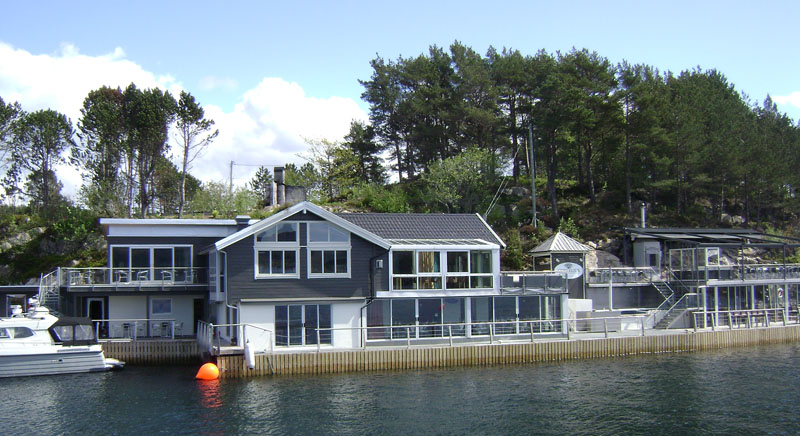 The island has been built up from a preexisting landscape, and its eco-friendliness goes beyond simply serving what it catches (divers go into the water daily to bring in a variety of seafood). The restaurant is actually designed to naturally manage such things as the temperature of a basement wine cellar, cooled by the surrounding waters. A buffet of fresh crab legs, mussels, prawns, crab bisque and more, along with a fine wine chosen by the restaurant and explained in great detail by its host, created a warm and relaxed context for even more first contacts, as members of JNiaN met with other international journalists, who were also in Bergen to cover the Bergen International Festival, as well as additional members of the Norwegian Ministry of Foreign Affairs.

It was an informal way to continue an endless dialogue, where people from around the world shared their impressions of JNiaN and Nattjazz as well as their own work. But, after the return to Bergen, it still wasn't over, as many of the remaining attendees went back to USF Verftet for one last evening of dinner, Nattjazz and more "until next times." With early flights and packing to do, there was only a little time for music, but attending even part of pianist Helge Lien's wonderful trio show at Sardinen was as great a way to say goodbye to Nattjazz 2010 as could be imagined.

Lien's most recent album, Hello Troll (Ozella Music, 2008), was a fine an introduction to a trio that's been together for nearly a decade now, and has released six titles—in addition to Hello Troll, three discs on the Japanese DIW label and two on Norway's Curling Legs. While it would be easy to draw some comparison to another longstanding Scandinavian piano trio, e.s.t.—whose career was cut short when its pianist, Esbjorn Svensson, died tragically in a diving accident—the two groups couldn't be more dissimilar. True, both groups are comprised of players of remarkable virtuosity, but while e.s.t. increasingly integrated electronics into the mix—in particular bassist Dan Berglund, whose overdriven double-bass brought a metal tinge to the trio—Lien and his trio remain an all-acoustic ensemble, and one that's less informed by the pop sensibility that gave e.s.t. its reach to a wider audience.

If there's any place for direct comparison with e.s.t., it would be with that group's final release, Leucocyte (ACT, 2008), an anomaly of a disc for the group in its all-improvised construction. That record signaled something of a new direction that, sadly, would never be fully realized, while the potential of Lien's trio continues to grow. Lien is a strong composer, but what links his music to e.s.t.'s final recording is this: while Lien writes music that contains challenging compositional constructs, when it comes to interpretation, there's a fluid and empathic chemistry between the pianist, bassist Frode Berg and drummer Knut Aaleflæt that makes every performance a rich and transcendent experience, reflecting the value of a longstanding lineup, one for whom instinct and intuition only grow with time.

Lien's music is deeply rooted in the jazz tradition, his Live (Curling Legs, 2005) even including a radically reworked and improv-heavy version of Paul Desmond's iconic "Take Five," made famous during Desmond's tenure with the Dave Brubeck Quartet. Lien's Nattjazz performance—in part a commissioned work by the festival—remained clearly focused on new original material, however, and a sound that combined the romanticism of Bill Evans and unfettered interactive interplay of Brad Mehldau with no shortage of the melancholy lyricism that made Esbörn Svensson so engaging. The musical camaraderie among the members of Lien's trio was palpable. Berg proved capable of an unshakable foundation, but in a solo during the trio's encore, he demonstrated a staggering, lithe muscularity and round, woody tone no doubt rooted in the work of fellow Norwegian, bassist Arild Andersen. Aaleflæt was all smiles throughout the set, moving seamlessly around the kit whether playing with his hands, sticks or brushes, with just enough added hand percussion to inject additional color when that need superseded rhythmic demands.

But while the tradition is endemic to the trio's work, so too is the influence of classical music, made all the more real when Berg played unison arco lines with Lien. Despite Nattjazz being a festival that runs the risk of disturbances, as audience members move from room-to-room and show-to-show, one of the most surprising aspects of the festival in general, and this performance in particular, was that when Lien and the trio brought the dynamics down so quietly that it was almost necessary to lean forward to hear them. The audience was absolutely, drop-dead silent—a rare enough quality even in more pristine concert environments and a testimony to the commitment and engagement of both the audience and Lien's trio. With a new album in the works for possible release in 2011, Lien's Nattjazz performance set the bar high for his follow-up to Hello Troll.

A quick visit to the Key Club for some additional farewells, and it was time to pack, catch a few hours' sleep, and head to the airport for the long flight home. As always, JazzNorway in a Nutshell proved a combination of comfort and revelation. Comfort came in the meeting up with old friends—industry people, journalists, artists and members of advocacy organizations from around the world—and the opportunity to experience musicians in performance that had previously only been heard on record. Revelation derived from the opportunity to interact with new friends and colleagues, and artists previously unheard. Traveling home with a suitcase filled with music, literature and photos, there's more than enough to keep the memory of JNiaN 2010 alive, but even more important will be the contacts maintained throughout the year in the hopes of reconvening yet again for JNiaN 2011. It's hard to imagine an event to top JNiaN 2010, but thanks to Lars Mossefin, Bo Grønningsæter and Brit Aksnes—as well as all the representatives from various other Norwegian organizations—and a history that has proven each successive year to be even better than the last, there's little doubt that JazzNorway in a Nutshell 2011 will be something to anticipate.

Page 5, All Other Photos: John Kelman