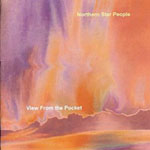 British keyboardist Jonathan Gee is best known for his acoustic groups and recordings, but for View From The Pocket he's teamed up with Finnish trumpeter Mika Myllari for the mostly electronic duo Northern Star People. Gee, who plays some acoustic piano but spends more time on a battery of layered electric keyboards, and Myllari, whose trumpet is also mostly heavily treated, are joined, occasionally and fleetingly, by a male choir, singing wordlessly.

If all this triggers your Ambient Noodling Alarm, relax, View From The Pocket isn't one of those albums. Instead of the portentous but bland exercise in modern muzak the instrumentation might suggest, this is vibrant, red-blooded jazz which, despite the presence of a Scandinavian trumpeter, further confounds expectations by altogether avoiding the somber and being shot through with wit and joie de vivre. In its love of novel sonics, retro references and absurdist humor, the music has more in common with American keyboard player Marco Benevento's exuberant Me Not Me (The Royal Potato Family, 2009).

Gee and Myllari, who have worked regularly together in Finland for about ten years, launched this latest collaboration at the London Jazz Festival in 2008. The tunes—half written by Gee, half by Myllari—reference a wide variety of electric and electronic genres, from trumpeter Miles Davis' early 1970s albums, through electro, jazz funk, 1980s synth pop, musique concrete and on to modern electronica. They do this, in the main, with a relish bordering on the manic, affectionately singling out and magnifying trademark mannerisms and anachronisms, and using them as the departure points for passionate and engaged improvising.

"Yellow Ball" and "Green" take Davis' electric innovations as their source, Myllari's trumpet digitally treated to take Davis' pinched, squally playing of the time to its ultimate extreme; the "tabla"-driven "Break" resonates with modern chill-out; "Pink" is 1980s orchestral synth pomp; "Blue" is reminiscent of trumpeter Tom Browne's dancefloor hit "Funkin' For Jamaica;" "Brown Ball," featuring one of the choir's contributions, sounds at times like Brazilian lounge-samba; "Red Ball" is a showcase for Myllari's acoustic trumpet, heavy on the wow-wow mute and right out of Cootie Williams, in front of bluesy acoustic piano and, just to keep things mutoid, a vocoder effect on another keyboard.

In case anyone with a sense of humor bypass is still listening, the closing (and brief) "Interview With Northern Star Person" has the interviewer's questions (example, "Tell us about the music of the spheres") answered in a voice so electronically distorted as to be unintelligible. View From The Pocket is serio-comic, but the chuckles it raises don't overpower its core content, which is fresh-hued and inventive improvisation.

About View from the Pocket