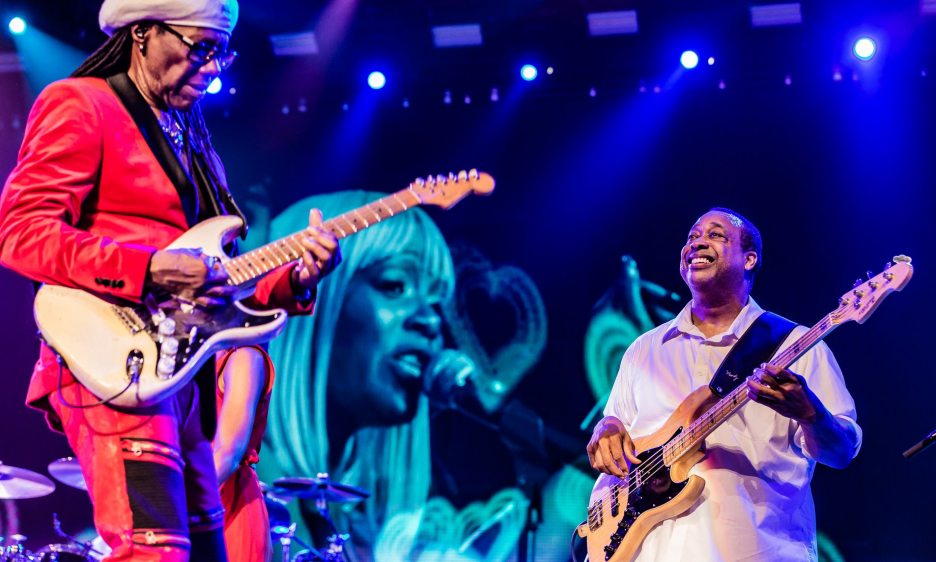 Amidst the cornucopia of summertime festivals, there sits a juggernaut. That's North Sea Jazz, where a dozen performance spaces named after rivers around the world offer a sound garden of global delights. The full-tilt feast flows gloriously during the second full weekend of July in a wild spectrum of musical royalty, rare improvisation and precise calculation.

The festival's relocation from The Hague in 2006 proved to be a prescient move, as the constantly upgrading city of Rotterdam has grown out of nearby Amsterdam's shadow. It's no exaggeration to claim that in relative terms of powerful performances or artistic quality over a 72-hour period, few other gatherings in the jazz genre come close. This year's edition kept that impressive tradition intact.

The Ahoy complex, which sits approximately five miles from center city, adapts a vibrant, pulsing personality all it's own. As tens of thousands of visitors inhabit multiple halls in a structure that's generally a conference and concert hub, it wouldn't be inaccurate to annex the setting into a Dutch suburb called Jazz Town.

The program is always massive. There are usually at least ten performances during the same time frame, so it's impossible for someone to witness every treat individually.

What follows are some of the acts AAJ was lucky enough to catch, for varying intervals, throughout the weekend. Every one of them was worth sticking around for an entire set. Musical abundance, thy name is North Sea.

Martin keyed up warped vocal effects that encircled the steamy, tentlike venue deemed Congo. When Scott stepped up to center stage phone cameras appeared en masse to record his exquisite explorations. Glasper's thematic groove was exemplary but his first extended solo was a bit too loudly repetitive, stuck somewhere sticky between worthwhile improvisation and art for art's sake. It was deep, maybe too deep but most of the interplay between keys was just fine. Scott unwound any tangled overkill with sticky staccato breaks while Tyson and and Hodge held things down like a submarine beneath the surface.

Regardless of some minor snags, this band produced some of the festival's most unique experimentation. Few groups could match their unquestionable skills.

Marcus Miller has been around North Sea enough times that he can play the crowd almost as well as he can play the bass. His set featured a series of superb solos in a sixty minute highlight reel that kept a good percentage in a crowd of well over 5,000 people dancing throughout. Miller was accompanied by Alex Han on sax, Russell Gunn on trumpet, Brett Williams on keys and Alex Bailey on drums. As good as it gets.

In case Miller's funkathon wasn't enough of a showcase in the art of precision bass, Stanley Clarke offered a master class of his own with a pleasingly unusual lineup featuring Beka Gochiashvili and Beka Gochiashvili on dual keyboards, Shariq Tucker on drums and Nader Salar on tabla. As technicians, it's apples and oranges between Clarke and Miller, both offer equally sweet nectar for the ears.

Every year, the Paul Acket Award, named after the festival's founder, goes to an artist that according to the press release is "deserving wider recognition for their extraordinary musicianship." This year's prizewinner was pianist Kaja Draksler, who relocated to the Netherlands from Slovenia when she was eighteen, finding both a new home and some unusual musical pathways. She appeared with her octet (including Lennart Heyndels on bass and Onno Govaert on drums), but the project was obviously a newer taste that not enough listeners acquired.

Interaction between violinist George Dumitriu and the reeds of Ab Baars and Ada Rave wove textures distinctly different from other acts while vocalists Bjork Nielsdottir and Laura Polence aligned in pleasantly abstract harmonies, but the ensemble couldn't hold even a small crowd's interest for very long. Most observers came in and caught a glimpse of the hall that was only about one-quarter filled, gave a perfunctory listen, then quickly skedaddled to more lively parameters.

A far more successful formula came from popular Scottish singer-songwriter Emeli Sande, who strutted out with the volume up and fronted a much harder edge than her radio-friendly Brit-pop catalogue might suggest. The show of strength inspired many variously aged groups of women to make a noticeable push forward and dance at the front of the stage in apparent sisterhood during hits like "It Hurts," "Heaven" and "Free." Sande brought along a large backup band that matched her big vocals, with singers Adeola Shyllon and Subrina McCalla, Kenji Fenton on sax, Mike Davis on trumpet, Paul Burton on trombone, Dale Davis on bass, Nathan Allen on drums, Junior Alli-Balogun on percussion and Xantone Fayeton-Blaca on keys. Sande has garnished a slew of British accolades in recent years. This show demonstrated why.

Judging from an overflow crowd that looked to be more than 15,000 strong, The Roots were one of the weekend's most popular acts. The Philadelphia crew gained widespread mainstream recognition as the house band for Jimmy Kimmel Live but by then they had already built a sterling reputation through word of mouth concert reaction.

They opened with an extended jam based around War's 1970s AM radio staple "Me and Baby Brother," adding a typical mix of nuggets or hinting at riffs from a pleasantly surprising stew of both street dancing and political action. Every band member is a jamming grandmaster at teasing tip of the tongue pop tidbits then switching gears into multiple grooves. A "Sweet Child O' Mine" refrain morphed into a cheerful sing-along with "Hootchie Cootchie Man" overtures.

There were special guests like Cory Henry and Gary Clark, Jr. The singer Bilal testified in the soulful "It Ain't Fair," a powerful, unfortunately accurate present-day US anthem. His emotional phrasing at the ballad's climax was one of the very top vocals of the night, and the song itself was a sure contender for best single performance of the festival. A small, unidentified horn section deserved recognition in the program guide.

You don't have to look any further for a definition of good time music or consummate showmanship than the set by Niles Rogers and Chic. Rogers set the mile-high standard by appearing alone on stage ten minutes before scheduled start time, for a "fake" sound check. "I know this is super unprofessional," said Rogers as he strummed his guitar. It was actually quite the opposite, considering how poor the overall sound can be during the beginning of many festival sets.

This was a highly polished show, about as brilliant as they come; with a great video background that evolved from '70s pop graphics to hologram type imagery. There was more than enough solid bass slapping by Jerry Barnes and leads from the horn duo (Bill Holloman, sax and Curt Ramm, trumpet) to qualify as a jazzy gig. A run of "I'm Coming Out" "Upside Down" "Greatest Dancer" included back to back to back peaks that probably match up well with anybody touring.

Throw in "Everybody Dance" and "Let's Dance," and there was no chance of missing the message. Almost the entire crowd responded accordingly, as Rogers joked during a singalong, "You better get it right, there's only one word." Even the dated hit "Like a Virgin" was well executed, no pun intended. It's hard to legitimately maintain the mass momentum to keep a huge crowd actively animated throughout a show, and few acts are capable of it. Chic, for the most part, did it from start to finish.

Rogers offered an often repeated narrative about his feelings as a cancer survivor that was sincere enough to make even more of a connection to the audience. "It's a family affair, with all of you, in an auditorium called Nile?" he reflected with a personalized touch before "Get Lucky." Those who saw this exceptional show were pretty lucky too. The band (Folami Ankoanda Thomson and Kimberly Davis on vocals Russell Graham and Richard Hilton on keys, Ralph Rolle on drums) deserved every bit of the massive reception they received. It was one of the rare times happy strangers could be tightly squeezed, then squeezed some more, among many thousands of their peers and still feel great about it. Watching the pulsing parade of people who danced their way in to the fully packed hall during "We Are Family," you could see there was still high hope for humanity.

Artist in Residence Michael League was at the helm of a different new project each night, starting with fresh rearrangements of gems from Snarky Puppy (in which League plays bass) and the Metropole Orchestra, conducted by Jules Buckley. A similarly fruitful collaboration earned a Grammy for the album Sylva (Impulse 2015). Their closing blockbuster nearly brought the house down, during what sounded like a re-imagined medley of "Palermo" and "Sleeper."

The next night, League alternated between keys and bass in the dynamic trio project Elipsis, combining traditional basics and tomorrow's abstractions. League partnered with drummer Antonio Sanchez drums and multi-percussionist Pedrito Martinez, who added vocals to the mix. There were great, rotating layers of polyrhythms while League milked magic from a rack of synths. "This is called Nine, I think, we're still trying to figure out what the titles should be," mused Martinez introducing one extended jam.

Even as a work in progress, Elipsis is a complete package. Sanchez employed many of the trademark rolls he uses with Pat Metheny, but there were also untypical twists and tom-tom turns. It looked like the three players had a blast during every song. The crowd looked that way too.

A short stroll from the gigantic Chic extravaganza to this much more intimate set less than 100 meters away was a perfect example of North Sea's greatest strength, a close proximity, infinite range of acts with jazz foundations. For the last leg of his varied three-day program, League shifted to guitar and appeared with Bokante, a global formation that featured singer Malika Tirolien from Guadeloupe. The band's debut album arrived via League's label, Ground Up, which he founded.