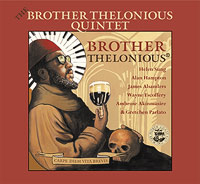 In 1931, industrialist John D. Rockefeller, Jr. donated two million dollars to the Save-The-Redwoods League to purchase some 10,000 acres of virgin redwood forests in Northern California from logging companies. These companies had already cut nearly 90% of the world's tallest trees, some of these redwood trees had stood on the coast of California since the year zero on our calenders. Rockefeller was persuaded of this mission after leaving New York and traveling to a river called Bull Creek hundreds of miles north of San Francisco to see these magnificent trees, some giants standing nearly 360 feet tall and 16 feet in diameter.

Back in New York, at 243 West 63rd Street in Manhattan, a fourteen year old Thelonious Monk was practicing at his piano, listening to the James P. Johnson and Willie "The Lion" Smith. Young Thelonious was developing what most jazz artists and fans consider to be the most original compositional style and language in music. Later Monk would be credited as one of the founders of bebop, along with Charlie Parker, Bud Powell, and Dizzy Gillespie.

Rockefeller had left his home in Manhattan, on Fifty-Fourth Street (a site that later became the Museum of Modern Art) to travel up the rugged and rocky coast through the Napa valley, eventually passing Ft. Bragg, a logging town that one day would be home to the North Coast Brewery. What Rockefeller didn't realize when he passed Ft. Bragg is that seventy years later, a few local residents would also embark on a preservation mission. That is, to preserve the memory of Thelonious Monk, one of the giants of jazz.

But this isn't a story of preservation, as in a museum. This is a story of fostering the spirit of Thelonious Monk and beer. Lots of beer.

North Coast Brewing, founded in 1988, has quickly become one of the country's top craft brewers under the direction of brewmaster Mark Ruedrich. On a recent trip to hike in the redwoods, my wife (the designated driver) and I visited the brewery and sampled all eleven beers. Actually we tried more, but things got a little fuzzy after the waiter opened barrel aged stouts and ales.

Our trip to California, specifically Ft. Bragg and North Coast Brewing also began, like John D. Rockefeller, Jr., a few years ago in New York. We were meeting friends for dinner and stopped at a local shop to pick up some beer. I spotted the Eduardo Smissen painting of Thelonious Monk on the label of North Coast Brewing's Brother Thelonious, a Belgian style dark ale and purchased a few bottles. Besides finding a new favorite ale, I learned that a significant percentage of the proceeds from the sale of Brother Thelonious goes to the Thelonious Monk Institute of Jazz to support their jazz education programs.

The institute has offices in Los Angeles, Washington D.C. and New Orleans and a board of trustees that includes institute chairman Herbie Hancock, Bill Cosby, T.S. Monk Thelonious Monk's son, Wayne Shorter, Clark Terry, and Jimmy Heath, plus leaders in the commercial jazz industry. The Institute is probably best known for the annual Thelonious Monk International Jazz Competition. The contest has launched the careers of now well known artists such as Joshua Redman, Marcus Roberts, and Jacky Terrasson to name a few. What you might not be aware of are the education programs the institute offers to students in grade school, high school, and college. Their public school jazz education programs help fill the very large gaps the American system has developed in the schooling of our children in the arts and music.

Naming Brother Thelonious was the brainchild of Doug Moody a VP at the brewery and long time jazz disc jockey (two dream jobs). Their new beer was fashioned in the style of brew crafted in a Belgian abbey by monks. Get it, Monk. The dark Belgian styled ale, Brother Thelonious has a rich molasses/caramel flavor with a hint of dark chocolate that is uniquely satisfying. What I didn't notice was the alcohol content of 9.4%. Like an original Thelonious tune, it can pack a punch! But then again so can North Coast's stouts, Old No. 38 and Old Rasputin, a very tasty Russian Imperial black stout. Quickly, the ale became one of their top sellers, and can be found in nearly all fifty states, and like Thelonious himself it is big in Japan and Sweden.

After creating the Brother Thelonious ale, the generous next step for North Coast Brewing was to produce the Brother Thelonious recording. Like the ale, proceeds from the music sales also benefit the Monk Institute. Stacked with Institute alumni and recorded at the New York's prestigious Avatar studios, the session was produced by Doug Moody and T.S. Monk. The quintet, led by the bright and nimble-handed pianist Helen Sung covers six Monk compositions, and presents four original tracks penned for this session. Like the annual competition, this disc introduces jazz fans to the future jazz stars. Readers of this website have noticed praise for the members of the Brother Thelonious Quintet; vocalist Gretchen Parlato, trumpeter Ambrose Akinmusire (the 2007 Monk competition winner), saxophonist Wayne Escoffery, bassist Alan Hampton, and drummer James Alsanders.

After my sixth beer, which was PranQster, a classic yeasty Belgian golden ale, I naturally had to ask "why." What is the reason for North Coast Brewing to support jazz, and specifically Thelonious Monk's music? Well, North Coast Brewing, being the largest employer in Ft. Bragg supports its community from local volunteer fire departments to schools and libraries. After conceiving Brother Thelonious ale, their neighborhood expanded to support the Redwood Jazz Alliance, and Monterey Jazz Festival and jazz festivals in Healdsburg, and San Francisco. It wasn't until the next day when I undertook a 10 mile hike in a redwood forest (a wee bit of a headache) that I understood the Thelonious Monk part.

Certainly words fail trying to describe the redwoods, and you cannot take a proper photo. The are tallest living things on earth, and your time on earth is just a few moments of their existence. It is the experience of being in their presence that is the payoff, as it was for Mr. Rockefeller in 1931. Like the 300 foot trees, the music of Monk is a living, breathing creature worth preserving. Not just as a museum piece or dated recordings, but as new and renewed music making. And while I might not be a Rockefeller, I can support music by hearing it live and, of course enjoying my new favorite beer.