By ANDREW VELEZ
February 4, 2010
Sign in to view read count 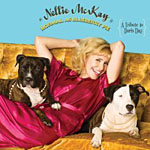 Listening to Normal As Blueberry Pie, one might say Nellie McKay is not a traditional jazz singer, whatever that is. In the case of this "Tribute to Doris Day," she's just good and also a lot of fun. Musically, McKay's voice can be feathery at times and, like Day, she has perfect pitch and an optimistic delivery that sounds effortless. All but one of the songs are drawn from the hundreds that Day recorded, from her big band days to movie songs but there is nothing ever imitative on McKay's part when she sings here. "The Very Thought of You" has a charming music box aura as multi-instrumentalist McKay plays bells, mellotron, tympani and tambura plus piano. On Hal Bourne-Johnny Mercer's "Dig It" she jumps and swings, backed vocally by Kevin Rennard, Paolo Perre and Lucas Steele for an irresistible jitterbug whiff of the Big Band era.

In this kind of atmosphere a tune like "I'm In Love With A Wonderful Guy" makes for ebullient catnip. By contrast McKay plays an ever-so-delicate ukelele as she wraps herself within a gossamer delivery of Antonio Carlos Jobim-Norman Gimbel's "Meditation." McKay's own "If I Ever Had A Dream" is easily imaginable as something Day might have sung in one of her films, its easy, lilting and buoyant quality enriched by Cenovia Cummins' romantic violin solo.

From Day's hit film Calamity Jane (1953), McKay rediscovers Sammy Fain-Paul Francis Webster's "Black Hills of Dakota." This is an amazing performance of what was likely hardly more than a throwaway song in the movie. By incorporating the use of a synthesizer alongside her high, soft, sweet voice, she and those sounds become something haunting and redolent with echoes of Native Americana.

McKay closes with "I Remember You." She does remember Day, in the best possible way. Using the mellotron and synthesizer again, the effect is at once nostalgic and completely au courant.

The Very Thought of You; Do Do Do; A Wonderful Guy; Meditation; Mean to Me; Crazy Rhythm; Sentimental Journey; If I Ever Had a Dream; Black Hills of Dakota; Dig It; Send Me No Flowers; Close Your Eyes; I Remember You.