By BRUCE LINDSAY
September 3, 2012
Sign in to view read count 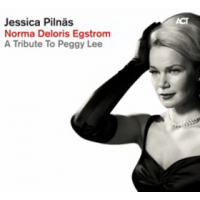 Peggy Lee is not an artist who is usually associated with Sweden, but as Norma Deloris Egstrom—A Tribute To Peggy Lee indicates, her real name comes straight from her family's roots in that Scandinavian country. Singer Jessica Pilnäs is Swedish, although this link is of relatively little importance to the music on offer here. More vitally, she's a talented interpreter of songs who can do justice to the legacy of one of the great singers of jazz and popular music.

Pilnäs doesn't, as yet, have Lee's international profile or status—although she's been singing for most of her life and has worked with trombonist Nils Landgren, among others. She's a talented singer and she's wise enough not to simply copy Lee's style. She's capable of replicating Lee's emotional engagement, however, be it the seductiveness of Cole Porter's "Do I Love You" or the pathos of Rodgers and Hart's "It Never Entered My Mind."

Pilnäs' vocals have panache and, in combination with the unusual instrumental lineup and Johan Norberg's arrangements, she gives the songs a very personal touch. Mattias Ståhl's vibraphone is used to particularly good effect as the album's lead instrument, with telling contributions from trumpeter Karl Olandersson.

Two songs in particular emphasize the range of moods and emotions that Lee commands. Pilnäs retains Lee's assertive sexuality on "Fever" but the music exchanges the original's cool, hip, style for a lighter and more humorous arrangement that puts Olandersson's muted trumpet and Ståhl's vibraphone to the fore. Ståhl opens "The Folks Who Live On The Hill" with a few bars of gentle, relaxing vibes before Pilnäs and bassist Fredrik Jonsson make their own understated entrance. With subtle use of the Fleshquartet's strings, this is a beautiful version of the song, all the better for eschewing the full-on and rather over-dramatic orchestral arrangement of Lee's own recording.

The song selection does occasionally seem rather quirky, with a few undistinguished numbers taking up space that might have been better occupied by much finer compositions. Lee may have written "I Wound It Up" and co-composed "Boston Beans," but they're a poor substitute for "Why Don't You Do Right," "Alright, Okay, You Win" or Leiber and Stoller's stunning "Is That All There Is?," to name just three songs she's strongly associated with. At least Pilnäs hasn't simply gone for the obvious entries in the Peggy Lee Songbook and she gives the same amount of care and spirit to every one of her performances.

Norma Deloris Egstrom—A Tribute To Peggy Lee is a welcome reminder of Lee's talents as a singer and composer. It's also a showcase for Pilnäs' own talent: she's an excellent interpreter of these classic songs and in creating a fine tribute to Lee, she has enhanced her own reputation.

There'll Be Another Spring; Do I Love You; Blue Prelude; Smile; Fever; This Is A Very Special Day; It Never Entered My Mind; What's New; Boston Beans; I Wound It Up; I'm Gonna Go Fishin'; The Folks Who Live On The Hill; The Gold Wedding Ring.