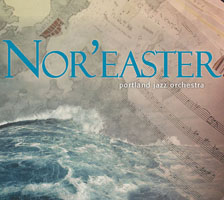 Although the era of the gig-to-gig road-traveling big band is defunct, save for a few ghost bands, fine regional big bands continue to thrive around the United States. From Los Angeles, killer bands such as Gordon Goodwin's Big Phat Band and Tom Kubis's and Gary Urwin's respective ensembles, to the East Coast where groups such as Tommy Igoe's Birdland Band, the Westchester Jazz Orchestra, Keith Pray's ensemble, Kenny Hadley's and others still fill venues with swinging jazz. The road may beckon, but, the economics nowadays don't.

Nor'easter , the debut CD from Maine's Portland Jazz Orchestra, continues and heralds the big band tradition in a marvelously entertaining, no-frills manner. Leader and fine trombonist Chris Oberholtzer has pulled together some of New England's best players and writers. With talent onboard to challenge some of the studio musician-comprised bands above, the PJO shines and draws positive comparisons. The music offered is intelligent, enjoyable and swinging.

The selections in Nor'easter are eclectic, with a bit of everything old and new. Benny Golson's "Killer Joe," gets a terrific new look in a faster-than-usual tempo, with a fierce saxophone battle between tenorist Marc LaForce and altoist Kyle Hardy. The quote clipped from Hubert Laws solo on Quincy Jones "Walking in Space" is an inside-hip touch, while Larry Williams' ballsy baritone peppers "Goin' Outside."

Trumpeters Craig Skeffington and Chris Marsh each shine in their solo excursions. Oberholtzer steals moments on the Oliver Nelson-like arrangement of "It's a Waltz ... Man," while "Anna's Song," composed and introduced with taste by pianist Chris Humphrey, has lovely Stan Kenton overtones. The rhythm section cooks on Bob Florence's "Carmelo's by the Freeway." All in all, the eight selections provide quality, not quantity; although the performances here are so good more would be marvelous.

In meteorological terms, a nor'easter describes a weather event—a storm of rain, wind, and biting chill. With Nor'easter, Portland Jazz Orchestra does, indeed, storm on with terrific charts, absolutely first-rate ensemble work and inspired solo playing that combines for a heavy downpour of talent and swing. Bundle up.

Killer Joe; It's A Waltz ... Man; Goin' Outside; The Vending Machine Isn't Broke (The Light Just don't Work); Anna's Song; Paquito's Revenge; One for Philippe; Carmelo's by the Freeway.