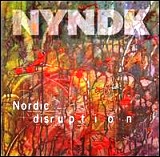 New York, Norway and Denmark come together through Chris Washburne (trombone), Ole Mathisen (saxophones), Per Mathisen (bass) and Soren Moller (piano) in a 1-2-1 combination to make up NYNDK. Coming as they do from different countries, they see their musical mission as one of international diplomacy with a mix of New York fire and Scandinavian cool.

NYNDK finds these characteristics whether they are playing a ballad or indulging in some hot, tasty funk. It jumps from the earthiness of Washburne's trombone and the cool ministrations of Moller's piano. Between the two, lies Mathisen. His saxophone not only captures a catchy groove, but also wanders into seductive odd time signatures.

A touch of "Histrionics" is welcome particularly for the way in which the band shapes the tune. Mathisen is off to the quick, riding an angular trail, adding fast jabs and a tumble of notes that blow across in an intense whirl. Washburne establishes a nice rhythmic articulation that is just greasy enough to be delicious. It's a blistering opener and quite the contrast to the ambrosial "Backward Glance" on which Mathisen plays with a sweet gentility letting the emotion soak in. Scott Neumann (drums) abets the mood by adding lithe textures, leaving space and letting the pulse breathe.

"Brooklyn" brings in a soothing air with Moller showing a virtuosic sense of dynamics. The band comes together seamlessly, in the ensemble lines of Mathisen and Washburne, the counterpoint and the supple beat. The potency increases as the quintet gets out and extends the perimeter by fermenting the melody and bringing in a vibrant texture.

Funk lathers "Elefantens Vuggevise (The Elephant's Lullaby)" after it has been reconstructed from a lullaby. Before the pachyderm or the listener can nod off pleasantly, Mathisen sets up the beat on the bass and Washburne zips in with broad salivating lines. Moller lays down a blues accompaniment and then waltzes out on his own before setting a more mainstream harmony.

NYNDK paces their tunes with panache and insight, and turn in a very listenable album.