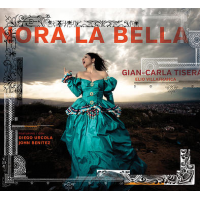 Gian-Carla Tisera was raised in Bolivia and completed her Masters in Opera Performance at the University of Southern California. In 2004, she recorded Bolivian Baroque with Florilegium early music ensemble under the Dutch label Channel Classics and has toured with Florilegium throughout Europe, Bolivia, Turkey, Singapore and the United States. In 2012 Tisera produced and recorded her debut album, which was co-produced by Elio Villafranca. The album featured arrangements of opera arias and Latin American songs displaying her operatic singing style that is fused improvisations containing a strong foundation in the jazz dialect. Tisera's music focuses on combining classical and jazz melodic, rhythmic and harmonic colors; her pallet included traditional and non-traditional songs with socio-political artistic expressions and thought-provoking collaborations with world music and experimental artists. Tisera lives and performs in New York City where her artistic partnerships have allowed her to pursue innovative approaches to operatic singing, performances and collaborations.

Tisera's 2014 release, Nora La Bella, continues the play of genres, mixing traditions and well known techniques to form a daring intersection between opera, jazz and Latin American folk music, art song and political song, experimentation and roots music. Tisera's soprano voice sings in English, Spanish, Italian and Quechua. Nora La Bella presents thirteen selections that range from original songs, stimulating versions of two works from the classical vocal repertoire and several pieces from the Latin American songbook, including a couple from the socially committed Nueva Canción. Tisera further explains her concept for the album, "I had this idea for a new kind of opera, something different, accessible and fresh. I love opera and that's my training, and while I am not a jazz singer or a traditional folk singer, both genres have been an integral part of my life and my musical experience. And I also thought: how can I express my immigrant experience? How can I speak of my perspective as a Bolivian woman, as an American woman looking back at my country from a distance? All of that came into play when working on Nora La Bella."

Nora La Bella has a central supporting team of Elio Villafranca at the piano, bassist Luques Curtis and Reinaldo de Jesus on percussion with guest artists on various tracks of trumpeter/trombonist Diego Urcola, Yayo Serka on drums, Jay Rodriguez on saxophone and clarinet, Manuel Romero and Rey Viera on coros and bassist John Benitez. Tisera's music nods to Bolivian folklore (her original "Señora Chichera" and "Cueca Lejanía") and her own versions of the aria "Tu che le vanita" from Giuseppe Verdi's Don Carlo, appearing here as the source for "Ernesto in the Tomb," and the madrigal "Amarilli" from Giulio Caccini's Le Nuove Musiche. Creative versions of the folk song "La Llorona" and folk based pieces "Alfonsina y El Mar" and "Mujer, Niña y Amiga." A selection form the Chilean folk group Quilapayún's "The People United," and Carlos Puebla's "Hasta Siempre," an ode to Che Guevara and his revolutionary principles that Tisera injects a musical quote inspired by Puccini. Tisera speaks about the songs further, "These songs carry deep social messages, and I chose them for how they inspired broken societies and gave hope to generations with powerful ideals of love and unity. They transcend time, culture and race and through them I express my artistic and political thoughts using my classical voice. Also, these choices help me challenge the perceptions that separate artists, especially classically trained artists, from their communities and from the music that speaks to the modern world."

"Señora Chichera" is an original by Tisera and Villafranca that is based on the traditional Bolivian folk song "Señora Chichera." Starting with a sexy syncopated bass figure and light percussion Tisera's warm soprano conveys the melody that has a Aeolian scale color with an occasional added major third color, barrowing from the eight toned Spanish scale. Trumpeter Urcola provides muted commentary between Tisera's phrases, keeping the same color and moving the music forward. The piano enters for the second A, providing light chordal support under Tisera's melodic lines, her ornamentations are clear and her rhythmic articulations are spot-on. Tisera's upper register is clear and she adds a fast vibrato at the end of some phrases but not all, keeping the technique fresh and musical. Her legato phrasing is also very controlled, sliding precisely from one note to the target note with control and precision. Urcola waves a fine melodic solo over the four chord harmonic pattern. The rhythm section does a fine job of listening and commenting during the solo, building under Urcola's lines to an interesting C section that has a double time staccato phrasing that is very effective in raising interest and energy. Tisera's soprano voice shines in her upper register, with high sustained notes and improvisational flurries. Urcola joins the festivities as the group builds to a repetitive rhythmic figure that functions a strong ending figure and completes our very satisfy musical journey.

Some listener might find her approach as avant-garde, but Tisera says she is, "pushing the vanguard to bring audiences to experience the greatness of opera as it relates to modern themes of love, politics and culture. I long to present opera not like an old, precious form, but instead, as a vibrant, contemporary style that speaks to our concerns now. That's why there are operatic moments in Nora La Bella—but they might include improvisation, or the musical treatment might include Bolivian or Afro-Latin rhythms, and elements of Rock or Spoken Word. I remember during the recording we were listening to the second take of 'Ernesto in the Tomb,' with its Afro-Cuban groove and my operatic voice soaring above the music. The musicians heard it and said 'Wow, it works!' and I had to laugh. 'Yes guys, of course it works.'"

"Nora La Bella" begins with light piano chords and light bass fills as Tisera's soft voice leads us to a 'Bel canto' melody of high clear notes, controlled wide vibrato, descending phrases, agile, flexible technique capable of transmitting ornate embellishments clearly with clean attack and diction all done with complete mastery of breath control. The music is freely pulsed, breathing with each phrase and following Tisera's direction. After a controlled sustain note the percusion and bass establish an Afro-Cuban groove that leads to a piano figure and the entrance of a three part male chorus to sing the chorus. The overall effect is reminiscent of the Rumba song form, with the first section, the canto, features the lead vocalist (opera in this case), performing an extended verses that is partially improvised. When the second part is signaled (established by the band) the other singers join in and repeat the short refrain of the chorus, in call and response with Tisera, this could be called the montuno section. Again the montuno section showcases some excellent vocal work from Tisera, all in the 'Bel canto' style with Afro-Cuban rhythm, accents and support from the band. The end result; creative music!

Nora la Bella is an album that effortlessly applies operatic techniques and control to a Latin American Folklore and Jazz Inspired songbook. With a unique fusion of Opera, Bolivian folk music and Latin jazz, Nora la Bella is a striking musical journey worth taking.