Allan Holdsworth: None Too Soon 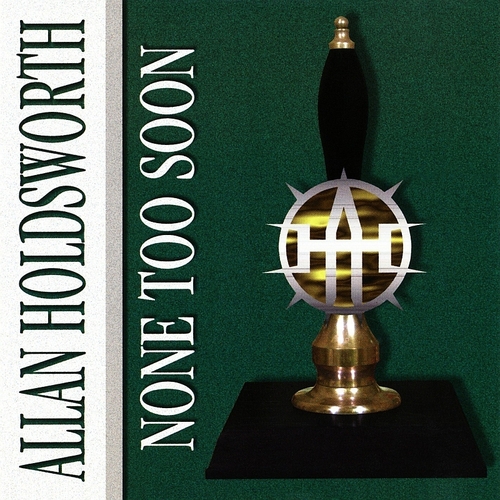 For his ninth album, guitar wizard Allan Holdsworth takes on jazz classics by saxophonists John Coltrane and Joe Henderson, pianist Bill Evans and more, plus pop classics just as famous for their jazz interpretations, in a set put together by Holdsworth's longtime musical associate and pianist, Gordon Beck. "Gordon chose most of the tunes, which I hadn't grown up playing and so wasn't that familiar with," Holdsworth recalls. "When he taught me one, it would be just like I was learning a piece of original music."

Holdsworth pops the top off of None Too Soon (recorded in 1996 but remastered to take advantage of 2012's digital technology) with a frantic electric guitar introduction to Coltrane's "Countdown" that screams out "Mahavishnu Orchestra"! After he settles into a more measured approach, the sound of Holdsworth's synthesizer-guitar flows between jazz-rock, jazz and progressive rock in a single voice, like different aspects of the same musical continuum.

Holdsworth and Beck modernize Django Reinhardt's emotive classic "Nuages" with harmonized synth-axe and keyboards which shift and rock upon subtle pulses from the rhythm section of bassist Gary Willis bass and drummer Kirk Covington, cohorts in the jazz-rock fusion institution Tribal Tech. "How Deep Is the Ocean" sounds nothing like the Irving Berlin ballad: Beck uses it as a framework for him and Holdsworth to rock out and jam while bass and drums toss its powerful rhythms back and forth like waves rocking the ocean. Beck's original title suite ("None Too Soon Part One / Interlude / None Too Soon Part Two") is well-considered and articulate in design and execution.

"Norwegian Wood (This Bird Has Flown)" paints an impressionistic watercolor of The Beatles' brooding, timeless classic in soft but bright guitar chords that more than once suggest Pat Metheny in sound and structure; after Beck brilliantly plays the acoustic piano role of Lyle Mays, Holdsworth's electric guitar roars back in and shreds this "Wood" to splinters. Holdsworth's meandering but profoundly emotional sound that opens "Very Early," written by Bill Evans, also suggests Metheny in a ruminative mood, while Beck spreads out a bright, dynamic acoustic piano solo like a blanket through the rest of the tune.

Holdsworth takes a bop-oriented approach to Joe Henderson's "Isotope," twisting and elongating melodic phrases like a sharp John Scofield, and, after another sparkling Beck solo, returns for a closing solo that explodes with the bright yet brittle metallic edge of harder rock guitar.