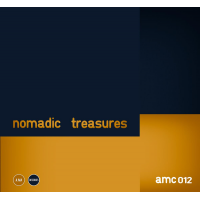 Nomadic Treasures is a European-based collective. As their name implies, they take inspiration from musical styles from all over the world, including jazz, Western classical music, and Jewish and North African folk musics. Israeli pianist/composer Avishai Darash wrote all of the music, with Greek singer Irini Konstantinidi providing the lyrics. The rhythm section is filled out by Italian bassist Daniele Cappucci and Catalan drummer Joan Terol Amigó.

Konstantinidi's sunny voice enters immediately over the odd-meter groove of "Gnawa Vibe, New Born," making it clear that this is vocal-oriented music (she does a bit of scatting on this one, as well). The Darash/Konstantinidi partnership produces real songs with lyrics. Darash apparently composes the music and arrangement first (with a guideline melody and notes about the song's inspiration), but the lyrics never sound like an afterthought—it all sounds very organic.

"Strong, Meditation" uses hand drums and muted piano to introduce its Latin groove. Darash also takes an uncredited electric piano solo (accompanied on the grand piano with his left hand), the only sound on the album that is not acoustic. "Verlangen" is a lyrical waltz. It should be mentioned that all of the lyrics are sung in English, regardless of the song-title language. "Kubbe" is the first of two short instrumental tracks. The other is "Taqsim," which sounds like the traditional improvisation used to introduce Middle Eastern compositions from which it takes its name.

"Madre" is a lovely ode to a mother's support and love. It also makes room for a brief bass solo, and features a dramatic extended piano solo, a fine demonstration of Daresh's prowess as an improviser. "Somewhere Nowhere" is an especially bright, upbeat tune. The title of "How Introspective" might imply a reference to the famous bossa nova "Insensatez (How Insensitive)." But there is no direct musical relationship: just another lovely song (including a lyrical bass solo), closing an album that is full of them. This is a band with real chemistry. Here's hoping for more from them.