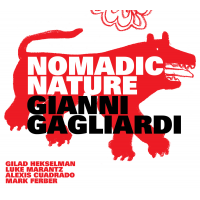 Barcelona-born, Brooklyn-based tenor saxophonist Gianni Gagliardi has long been a wanderer. He left his homeland in his teens, relocating to the Netherlands to further his jazz knowledge at the Conservatorium van Amsterdam. Later moves found him soaking up information at SUNY Purchase in New York, Le Conservatoire National Superior de Paris, Boston's Berklee School of Music, and Berklee's Valencia, Spain-based branch. Those experiences, along with international touring, make it clear that Gagliardi knows a thing or two about the nomadic nature of the modern day jazz musician. He willingly shares that knowledge on his debut album.

Nomadic Nature finds Gagliardi fronting a quintet of like-minded modernists, delivering music that's distinct and bracing. Dynamic arcs, devilish thoughts aplenty, and a sense of drama and mystery are all alive and well in Gagliardi's work. One of his many gifts surrounds his ability to shape and build intensity, only to have it slowly recede into the distance. He does it on the album opening "Paris," which opens with a thunder crack, sonic celestial seasonings, and a few sighs. From there, Gagliardi begins to unspool ideas with some help from his front line partner—guitarist Gilad Hekselman. Over an eight-plus minute lifespan, the piece maintains a bell curve shape on the power scale.

As the first few songs pass by, the relationship between Gagliardi and Heksleman seems to deepen and broaden. They navigate their way through dangerously snaky lines with nary a worry on "L'ironie D'une Jolie Prisse De Tete," and they trade solo statements on "Macanudo Man," building on each others thoughts and providing support. Each of those pieces are different in many ways, yet they're cut from the same cloth. And just when it looks line Gagliardi has worked his way into a specific stylistic niche, he works his way out of it with "Sillynette," an irresistible, Ornette Coleman-esque number that gives Gagliardi and Heksleman a chance to carry on a musical conversation before they cede the spotlight to bassist Alexis Cuadrado and drummer Mark Ferber. Then it's off to gentler territory. Gagliardi moves into calmer environs on the balladic-turned-waltzing "Margolinda," featuring a pleasing-and-relaxed solo from pianist Luke Marantz.

The final three tracks all go in different directions. Streaming support underlines melody as "Timarelo" takes off, but it evolves from there; "Varicela Patagonica" gives Hekselman a chance to get a little dirty and raw, as his guitar sets the mood for that weighty and dark performance; and "Senor Coltrane" closes the album with this saxophone conquistador exploring and conquering in the name of one of the instrument's immortals. It's a strong ending to an album with lots to offer.