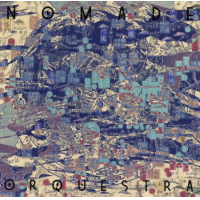 In 2012, ten of the most adventurous and accomplished musicians in São Paulo, Brazil, came together, took root and blossomed like a tropical flower. Nomade Orquestra describes their music as "the point where different musical expressions and strands meet and interact in a unique way," a fair way of pointing out that there is no other band, and no other music, like Nomade Orquestra.

Nomade Orquestra captures so many different instrumental sounds and styles that it challenges any clear description or explanation. Different tracks, styles, and soloists drift in and out of focus in natural, unforced rhythms, like clouds floating in and out of sunlight. Arrangements generally spotlight the trumpet (Marco Stoppa), marimba (Beto Montag) and guitar (Luiz Galvão) soloists, but these compositions feel very "open," so elastic in time and space that every contributor can shine.

These songs paint such clear scenes with so much depth, breadth and color that they sound cinematic. "Morning Birds" opens with an ancient horn sound, as if gathering worshippers and acolytes to greet the dawn; once in full flight, Montag's dancing marimba fences with sharp guitar and organ chords and then joins the closing chorus. "Garuda" also greets the day with fluttering bird flutes and rattling percussion before it grows like a Middle Eastern olive vine upon Luciano Sallun's alaude (oud) and André Calixto's soprano saxophone.

Writing about Nomade Orquestra this way can make these songs sound academic but they're really a ton of fun. "Fuego Policia" throws down funk-rock bursting with roundhouse horns, dueling saxophone and trombone solos, keyboard and organ psychedelics, and a tumultuous, percussive backbeat. Six minutes of condensed primal musical fury, electric and hot, "A Vida Vem Em Ondas" shuts this set down with drummer Guilherme Nakata pounding out a boogaloo beat while Stoppa and Galvão respectively unleash trumpet and guitar solos so fast and hot they blister your ears.

But "Venus" is Nomade Orquestra's crowning achievement. This twelve-minute epic, a goddess on the mountaintop who burns with a silver flame, placidly rocks back and forth like Buddha keeping the beat while flute and electronics overgrow the sound like a Japanese hanging garden until electric guitar stomps and gnaws the soundscape like a rampaging Godzilla. It's like Henry Mancini composed a trip-hop jazz soundtrack for a contemporary Japanese film...

Henry Mancini composing a trip-hop jazz soundtrack for a contemporary Japanese film may not be great writing, but it's a great illustration of the fact that I've been writing about music for nearly forty years, and writing about Nomade Orquestra has been my biggest challenge. Ever. Words do not justly explain or describe the depth, breadth, scope, and vision of this debut. You simply must experience it for yourself. You'll be very rewarded when you do.