By JOHN KELMAN
September 24, 2005
Sign in to view read count 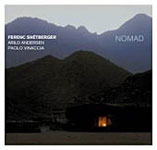 They say music is the international language. That's true, but like any language it can have an infinite number of dialects. Add to that the result of cultural cross-pollination, and the language of music can become as complex and unfathomable as any other. The intricacies and complexities of jazz might be hard for a pure punk devotee to understand, for example, but the beauty of a simple folk song might also be lost on someone whose tastes run strictly towards the avant-garde.

Then there are those who believe there are no barriers in music and are able to assess it on its own merits, with the openness to see its potential, even if it's something that doesn't fall within their usual comfort zone. With pan-global collaborations becoming more and more the norm, it's increasingly important to listen to music with bigger ears, realizing that purer cultural concerns are no longer sacred and that a big part of the future of music is about finding new ways to bring together a wider range of influences.

Hungarian-born acoustic guitarist Ferenc Snétberger has been living in Germany for nearly twenty years, and in the past couple of years he has been involved with two pan-European groups. Joyosa—with German trumpeter Markus Stockhausen, Norwegian bassist Arild Andersen, and French percussionist Patrice Héral—released its self-titled debut last year. Here Snétberger's own trio again teams him with Andersen, plus ex-pat Italian drummer Paolo Vinaccia, who has made Norway his home for the past 25 years. The trio's first disc, Nomad, is all about breaking down cultural boundaries and finding ways to blend them into something new and personal.

Joyosa is a true cooperative. But despite its collective democracy in an improvisational sense, the majority of the material on Nomad—seven of the ten tracks—is Snétberger's, making this a clearer view of his own musical vision.

Those compositions reflect various interests—the balladic "Empathy owing a debt to Jim Hall's spare economy, "Childhood Johann Sebastian Bach's inner logic, "Song to the East the allure of Indian music, and the dark and understated tumult of "Waterkiss the untarnished beauty of Egberto Gismonti. But while it's possible to find these and other sources in Snétberger's music, his own voice incorporates a synthesis, filtered through his own lyricism, gentle touch, and seamless blend of linear phrasing with finger-picked arpeggiated chord movement.

Andersen is, of course, an equally lyrical player and a composer with a more open-ended disposition. His warm yet visceral tone and occasional use of looping to create string washes give the music more textural depth. Vinaccia, who's comfortable in a variety of contexts, plays with suitable understatement, often displacing the beat so that even a potentially conventional set of changes takes on a different complexion.

Nomad presents a more specific aspect of Snétberger than Joyosa did, but in many ways it's really just another side of the same coin, marked by the common denominators of organic writing and subtly nuanced interaction.

Visit Ferenc Snétberger and Arild Andersen on the web.