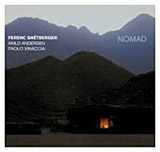 Nomad is the seventh release by Hungarian-born, Berlin-based acoustic guitarist Ferenc Snétberger, but in many ways this collaborative effort may be the culmination of experiences by his collaborator, Norwegian bassist Arild Andersen, with small ensembles that feature acoustic guitarists. Andersen recorded Karta (ECM, 1999) with two of Snétberger's musical partners—German trumpeter Markus Stockhausen and French drummer/percussionist Patrice Héral—plus fellow Norwegian guitarist Terje Rypdal; four years later, Snétberger replaced Rypdal for the recording of Joyosa (Enja, 2004). Karta and Joyosa focused on improvised textures and ethereal atmospheres that emphasized the distinctive personalities of each member of these quartets. In contrast, Nomad, which also features Italian-born and Oslo-based drummer/percussionist Paolo Vinaccia, a close associate of Andersen, is much more grounded in song formats and emphatic interplay.

Nomad was recorded in ECM's home base, Oslo's Rainbow studio, by master sound engineer Jan Erik Kongshaug, who managed to capture the warm, vibrant sound and natural ease of this session. Snétberger is credited with seven of the ten tracks, but all of them sound as if they were not written with a special leader in mind. And all reflect Snétberger's nomadic roots and the breadth of his musical vocabulary, from gypsy guitar virtuosity through the subtle sophistication of Jim Hall and the wealthy vision of Egberto Gismonti.

The opening track, "Empathy," exemplifies the beauty of this trio. Snétberger outlines a simple and charming theme, while Andersen consolidates the ballad with imaginative and elegant lines and Vinaccia colors it with spare playing. The following "Childhood" is more about fiery improvisation on a catchy guitar chord progression, and on "Nomad" Snétberger alternates between Spanish and Latin American rhythms, filtered through Vinaccia's clever use of electronics.

"Song to the East" is based on a loose format of call-and-response interplay that's typical of traditional Indian music, and Snétberger succeeds in suggesting an original role for the guitar in that context. Andersen has led several acoustic guitar-based trios in the past which have referred to his folky roots (the magical Sommerbrisen, KKV, 1998; and less cohesive If You Look Far Enough, ECM, 1993). In the same manner, this trio features a blend of folk-based themes, really excelling on some of the tracks, especially "Yellow" and "Move," where Andersen's lyrical tone and organic fluidity are magnificent.

This trio manages to encompass many elements and evoke many joyful images in its unassuming and haunting playing. Beautiful.

Visit Ferenc Snétberger and Arild Andersen on the web.