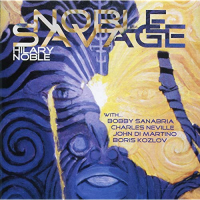 One has to admire the energy that is poured so lavishly into many albums of Afro-Cuban Jazz. Noble Savage bristles with vitality as it explores the many facets of Caribbean-influenced music, with side trips to Australia, home of saxophonist / conguero Hilary Noble’s forebears, and New Orleans. Much of that firepower springs from drummer / percussionist Bobby Sanabria’s perseverance as well as from Noble’s remarkable mastery of the congas, which he plays on half a dozen of the eleven numbers. Not many percussionists double on saxophone, or vice versa, and Noble must be applauded for his competence in both areas. As a saxophonist he blends a number of styles from bop, R&B and gospel to the more cutting-edge paths followed by such trailblazers as Ornette Coleman, Eric Dolphy and especially John Coltrane.

In spite of what seems an almost irresistible urge to screech, especially on tenor, Noble is a respectable improviser with bang-up technique and fluency. Noble composed eight of the album’s eleven selections and co-authored the brief “Güiro Moderno” with Sanabria. Rounding out the program are Andy McWain’s gossamer “Dream Dance” and Charles Mingus’ strutting “Jelly Roll,” which dances straight to the heart of New Orleans-style Jazz on the wings of Sanabria’s street-wise drumming and rollicking solos by Noble (soprano and tenor), pianist John di Martino and bassist Boris Kozlov. “Jelly Roll” is a highlight, as are “Dream Dance” and Noble’s swaying “Rumb’azul” and galvanizing “Sanduga Mofongo.”

The finale, “Terra Australis” (Southern Land), which Noble describes as “a sinuous and unsettling hymn to Oz, home of my forefathers,” is precisely that, a medium-tempo tone poem that begins well before drifting uneasily toward a strident and less than agreeable ending. Happily for the listener, an abundance of lively and colorful Caribbean-based Jazz precedes it, earning Noble Savage high marks for enterprise and enthusiasm.

The Fire Next Time; Rumb