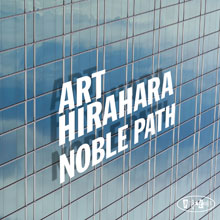 Art Hirahara has gained the most notice for his work on saxophonist Fred Ho's adventurous outings, but the pianist's own music, while occasionally outward bound, often has a more immediately accessible sound to it. Featuring eight pieces from Hirahara's pen and four newly arranged classics, Noble Path is a piano trio record that's both commonplace and unique. The album can seem like a standard trio affair because few pieces veer too far off the road and the material is delivered with polish and panache, but Hirahara's sense of programming and ability to tap into different ideas at will, and the communicative skills within the trio, all help to elevate this album high above the mundane musical meals that often tend to serve as piano trio outings.

Hirahara expertly covers all of the must-haves on a trio date, including a jazz waltz ("Ebb And Flow"), perky and soulful Brazilian-inspired fare ("Stood Down"), classy (if somewhat forgettable) straightforward swing ("I'm OK"), and enjoyable standards ("All Or Nothing At All" and "Ev'ry Time We Say Goodbye"), but he also pushes the envelope in a few places. He delivers music with a loose and flowing celestial aura ("Peace Unknown") and explores the darker and scarier side of night music ("Nocturne") with supreme skill and a fearless attitude.

While the majority of the music focuses in on Hirahara, with drummer Dan Aran and bassist Yoshi Waki providing support and taking a backseat as soloists, that isn't always the case. The looser numbers tend to be more collaborative affairs, Waki's work at the outset of "Vast" proves to be the best part of the piece, and both rhythm men trade fours and have a ball on a buoyant take of Billy Strayhorn's "Isfahan." Of the standards, Dizzy Gillespie's "Con Alma" tends to stand out because of its unique arrangement in five and the sheer joy that all three musicians seem to be feeling, but all four classic covers are first-rate. In fact, all twelve pieces on Noble Path give notice that Art Hirahara's music is worth hearing.

I'm OK; All Or Nothing At All; Stood Down; Ebb And Flow; Noble Path; Con Alma; Peace Unknown; Change Your Look; Isfahan; Nocturne; Vast; Ev'ry Time We Say Goodbye.