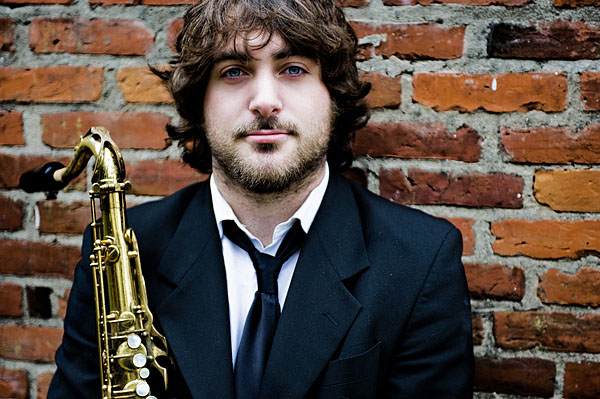 To judge by his sophomore effort, Before the Rain (Palmetto, 2011), tenor saxophonist Noah Preminger's singular forte is the reinvention of the ballad. He does it so well, and so nearly exclusively, that it came as a pleasant surprise, during his performance at Scullers Jazz Club in Boston, Mass., that there is so much more to him than that (not least his power to surprise), and that he can do so much more, which, essentially, comes down to anything to which he sets his mind.

However canny Preminger's grasp of the jazz idiom, he has an uncanny self-awareness as a musician, zeroing in on his chief precursor, Dewey Redman, on whose influence he draws consciously but soberly—backdating to Redman's own sources, including not only John Coltrane and Ornette Coleman. Rather, Preminger goes all the way back, to summon Lester Young's spirit in his spicy, spiky but somehow always mellow mix of style and substance.

Using the same quartet as on his album—with Frank Kimbrough on piano, John Hébert on bass and Matt Wilson on drums—Preminger opened with the original "K," evoking late Coltrane ballads. Wilson introduced it with high energy drumming, involved but somehow spare, like a thicket of brambles in midwinter. Kimbrough and Preminger entered at conflicting, slower tempos, setting a course for the night with an incipient innovation involving centrifugal force, such that a canvas-building occurred, as the musicians fought one another thematically.

Preminger is a worthy leader, but also very much a team player. Despite the thematic tousling, there was also keen mutual listening among the artists. They knew just when to follow one another and to work in unison in the ensemble sections. Interruption, interpellation, balance and counterbalance—even off-kilter escapades—all were incorporated tactfully, with patience and due respect for occasional quietude and silence.

Kimbrough was reminiscent of Keith Jarrett, particularly the pre-solo Jarrett of the early '70s, with Chopin-esque washes that went against the jazz grain, but kept building like the tide. Hébert, as bassist, was the strong, silent type, keeping the flow going almost imperceptibly except for a haunting undertone and a very rare solo, at which he was acutely apt and able.

Preminger was spare, but always on the move with a new idea, making it a challenge to keep apace. At 24, he is still wearing his influences like masks at times. Usually, this was done with deftness and aplomb, although there were one or two moments where he took too much refuge in a jagged Coltrane-like arpeggio, or "sheet of sound," and it wasn't clear if this was truly felt or simply a moment of desperation. This is all part of the growth of any artist in this day and age, though, with the massive weight of precedence on his or her shoulders.

He kept the pace lively by throwing in two Coleman numbers ("Toy Dance" and "Street Woman"), and a Thelonious Monk tune, "Four in One." Even though he only played two outright ballads—the original "Before the Rain" and the standard "Where or When"—he was right to choose this field to prove his mettle and shoot his mark. He challenged his audience most here, immersing them first in a cold, false dawn but compelling them to stay there until bathed in the true, warm sunrise.