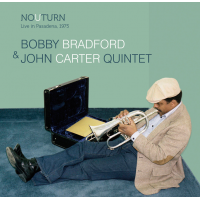 History, it is said, is written by the victors. With jazz history, the story is too often written by New Yorkers, or at least those east of the Mississippi. Listeners with inquisitive minds are required to dig deeper, into record bins and into interviews with musicians to learn about players that did not make New York their home.

We are fortunate to have dedicated musicologists who find 'lost' recordings and make them available to fans. A fine example is No U Turn by the Los Angeles-based ensemble led by cornetist Bobby Bradford and saxophonist/clarinetist John Carter. Both players, originally from Texas, had significant collaborations with fellow Texan-turned-Los Angeles resident Ornette Coleman, and both extended Ornette's vision with a mix of John Coltrane's post-bop vigor and Albert Ayler's expression. Their influence today can best be heard in the music of Frode Gjerstad, Ken Vandermark, Kirk Knuffke, and Rob Mazurek.

This live date, recorded at Caltech's Baxter Lecture Hall in 1975, is a superb companion to the Mosaic Select (2010) release that pulled together their recordings from 1969-79. This Pasadena date features a quintet with drummer William Jeffrey and two bassists, Roberto Miranda and Stanley Carter. Carter plays soprano saxophone and clarinet. He later dropped the saxophone (was it the huge shadow of Coltrane?) in favor of clarinet only. The night opens with Bradford's "Love's Dream" as Carter's soprano and Bradford's cornet serpentine notes over the relentless pulse of Jeffrey and the chanting two-bass murmurs. The music is an energized mix of push and pull between Bradford and Carter. The pair balance the chord-less progressions of Coleman against a post-bop insurgency, making for compelling sound.

If Bradford is this band's emotional center, Carter is it's intellectual hub. His clarinet is crisp, organized and a marshaling influence. Their piece (is it this band's signature composition?) "Circle" opens with solo clarinet, then cornet, before the pair weave tighter and tighter patterns into the progression. The remarkable thing about this recording from 40 years ago, is that in a blindfold test most listeners would certainly misidentify this as a 21st-century small group from Chicago or maybe Stockholm. No U Turn is a discovery of great significance.