Roscoe Mitchell: No Side Effects 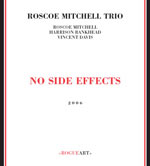 Very few musicians have made a first statement like Roscoe Mitchell's Sound, recorded for Delmark in 1966. Like the proverbial big bang's reverberations, all of his subsequent work consists of gestures from but not confined to that era and the freedom it fostered.

Mitchell's recordings can elicit a deeply intuitive but ultimately inexplicable sense of unification in the face of superficial diversity, and this newest double disc is no exception. The pieces can consist of the quickest whiplash and spike-driven trio squall, though, astonishingly, a degree of control is always in evidence. The aptly named "Flash is a case in point, Mitchell's quick-shod saxophone swirls skirting tempo with stunning precision while Harrison Bankhead provides rock-solid but supple bass accompaniment; Vincent Davis is similarly solid, enlarging Rashied Ali's sonic palette with slight hints of swing and funk.

Yet, it is Mitchell's repetitions, those fragmentary manifestations of eternal recurrence, that hint at the set's binding aesthetic. A track like "Poem demonstrates the other extreme, as long drones slowly drift, evolve, revert and disappear. Bankhead and Mitchell engage in the gorgeous counterpoint that has long been a part of Mitchell's compositional language; Davis breathes consent, exuding newly liquefied moments of glacial rumblings and slow waves.

The collection hinges on this fast/slow dialectic, each small part representative of the whole. The programming is as convincing as the playing, as Mitchell showcases flute, baritone saxophone and percussion cage on a diversely satisfying set of trio workouts, some composed and some improvised. Sometimes the lines are blurred so badly as to make those distinctions irrelevant—so much the better! This is as interesting and exciting a release as can be found in Mitchell's dauntingly large discography.