By HRAYR ATTARIAN
October 8, 2012
Sign in to view read count 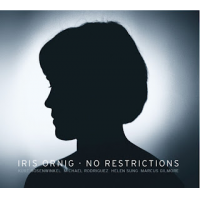 Intrepid bassist Iris Ornig's second release follows the thematic structure of her remarkable debut, New Ground (Self Produced, 2009), but is more polished and coherent, hence more engaging. This is a hard goal to achieve, as the first was a thoroughly enjoyable and stimulating album.

If New Ground was a collection of short stories sharing a common thesis then No Restrictions is a novel, exploring a similar leitmotif and expanding on it. The emphasis is more on original compositions, and even the two arranged covers do not come from the jazz canon but are of pop music origin.

The other arrangement is Michael Jackson's "The Way You Make Me Feel," that gets a soulful groove with blue tinges and features trumpeter Mike Rodriguez's funky, Kenny Dorham-influenced sound. Ornig's own solo demonstrates her supreme lyricism and ingenuity as an improviser and an instrumentalist. Her complex embellishments not only bring the tune solidly into the jazz realm; they also demonstrate the full potential of an instrument that, even after a century of evolution, too often gets relegated to the role of a timekeeper.

The intricate and multilayered "Gate 29" is a gorgeous composition that features Rodriguez's burnished trumpet with the right amount of vibrato blowing a melancholic song. Like a modern day troubadour Rosenwinkel's romantic yet blistering tones maintains the wistful ambience. Sung's flowing but edgy pianism colors the piece with darker hues. Ornig's tight and deep vamps and Gilmore's keen and assertive polyphonics integrate the individual voices of the band members into a satisfying whole.

Not one to hog the spotlight Ornig relies on the intimate esprit du corps that permeates her quintet's ensemble work. The group creates a bittersweet ambience on the impressionistic ballad "We Shall Meet Beyond The River." Rodriguez's crepuscular and elegiac horn mixes well with Rosenwinkel's bluesy strings like a rain puddle shimmering in the setting sun. Ornig' resonant vibrations and Gilmore's sensitive brushes and sticks create a rhythmic structure that supports this elaborate interaction. Sung's keys sprinkle clusters of earthy notes like a gentle rain shower.

A consummate musician, Ornig demonstrates a combination of sophistication, maturity and originality with No Restrictions that is rarely present so early in someone's career. This unique elegance and worldliness will, hopefully, remain the trademark of her art for years to come.

Autumn Kiss; We Shall Meet Beyond the River; Venus As a Boy; No Restrictions; If Anything Goes Wrong; The Way You Make Me Feel; Gate 29; Spark of Light; No Restrictions Version II; Uptight.