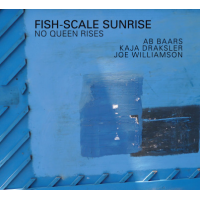 Dutch reedman Ab Baars goes out of his way to avoid sentiment in his playing. He plots courses that veer willfully from melodic to shrill, but always remains in control. The most striking aspect of Fish-scale Sunrise, named after a poem by Wallace Stevens, is how much this approach to improvising is reflected in his composing too. Inspired by AACM reedman Roscoe Mitchell, with who he performed in 1986, and by his association with the enfant terrible of the Dutch scene pianist Misha Mengelberg in the ICP Orchestra and elsewhere, Baars has developed a deeply personal style, which Mengelberg termed ab music.

Slovenian pianist Kaja Draksler and expat Canadian bassist Joe Williamson thoroughly buy into his conception, realizing the pieces in the reedman's image, yet still retaining their own voices. The nine tracks range between 3 and 7 minutes and comprise two group improvisations alongside seven from the leader's pen. Sometimes there's not a lot of difference between the two. Some of the compositions, like "For Toby" and "Now," sound as unfettered and unpredictable as the improvs. Conversely the collectively-generated "Receding Mountains" is one of the more consonant outings on the disc.

Draksler, who is making quite a name for herself from her Amsterdam base, often provides some of the structural framework for the pieces. At times she recalls a slowed down version of Cecil Taylor with her jagged motifs. By shouldering that responsibility she leaves Williamson free to roam widely without the need to hold down a pulse, often appearing the wild card, as he does with his careening arco throughout "Catch The Moon."

The group thrives on juxtapositions and contrasts. Staccato exchanges create a nervy edge, especially in the title track and "Endless." Brief snatches of melody and unison playing illuminate Baars' charts, which exert a strong influence over the open interplay on cuts like the sprightly "No Queen Rises," where the extemporization stays true to the tempo and accentuation of the theme.

There are echoes in the instrumentation of Jimmy Giuffre's seminal Free Fall (Wax Time, 1952), but the outcomes here are far more unprecedented. Like the natural world which inspires many of the titles, Baars' music possesses no obvious agenda, it just is.