The Joshua Breakstone Trio: No One New

By WOODROW WILKINS
October 5, 2009
Sign in to view read count 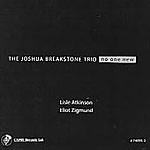 The trio is a tried-and-true format for jazz. Every now and then, the form is tweaked a little—instead of piano/organ plus bass and drums, it's guitar, bass and drums. The Joshua Breakstone Trio is part of this sect, and delivers with No One New.

The title refers to the leader, who has been a front man for about 30 years. He counts among his influences Lee Morgan, Charlie Parker, and Clifford Brown. Experiences seeing such performers as Jimi Hendrix and Frank Zappa led Breakstone to the guitar. He is joined on this date by bassist Lisle Atkinson and drummer Eliot Zigmund.

"Over-Done" is anything but. This high-energy track engages from the first notes. While Breakstone carries the lead, Atkinson and Zigmund are in the moment as well. During one phrase, Breakstone cleverly quotes "Mary Had a Little Lamb" before continuing his freestyle play. Zigmund mixes in some snare rolls, but part of what makes his play interesting is the varying textures of his snare strikes. Atkinson contributes a solo.

"Come on Baby" is an easygoing piece. The trio playfully expresses the mood of a suitor trying to encourage a love interest to go along. Atkinson, who wrote the piece, makes the bass sing during an early solo, working in some rumbling, notes-per-beat phrases. Breakstone then turns on the charm in this melodic attempt to woo. Zigmund is emphatic during a call and response with Breakstone.

With the title, Breakstone is basically saying he's been around. So it's no surprise that No One New is straight jazz with no chaser. All eight tracks—six originals—are upwards of six minutes, giving the trio plenty of room to express, and they do.

Over-Done; For Me; The Unknown One; Come On, Baby; Blues Heretofore; No One New; The Peacocks; The Kicker.