Allen Austin-Bishop: No One Is Alone 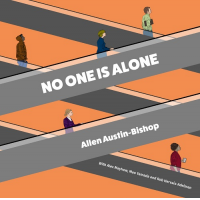 Possibly the best love song ever written, Ewan MacColl composed "The First Time Ever I Saw Your Face" for Peggy Seeger in 1957. She was in America. He was in England. Then, in those far off days before the IT revolution, when transatlantic calls cost a small fortune, he sang the song to her over the telephone. It's a short number, remarkable for a lyrical intensity that conjures up visions of eternity:

The first time, ever I saw your face

I thought the sun rose in your eyes

And the moon and the stars

Were the gifts you gave

To the dark, and the endless skies, my love

To the dark, and the endless skies

It is a great shame MacColl never recorded the song himself. There is only a rather painful folk version by Seeger.

In 1972 Roberta Flack made the song her signature tune. She sang it perfectly, turning it into a glossy, monster hit, but in the process stripped it of some of its magic. Now in 2018 Allen Austin-Bishop, an American vocalist who—like Seeger when she met MacColl—lives in the UK—comes along to take up what's left and renders MacColl's beautiful song plain ordinary.

He goes on to work the same trick on 12 other modern so-called standards, including the title track by Stephen Sondheim, which—while it may not be one of The Man's better numbers—surely did not deserve such a fate.

Austin-Bishop is better on less prestigious numbers such as Paul Williams' "Ordinary Fool" and Nat "King" Cole's "That's All." But he positively murders "The Way We Were" before going on to also inadvertently deconstruct Burt Bacharach's "Close To You," painfully drawing out the syllables. Needless dollops of soul-style melodrama do nothing for George Gershwin's "Summertime" or the sadly outdated "Poor Butterfly."

However, as with all things musical, good, bad and indifferent, the show does eventually come to an end—appropriately with a live version of "Amazing Grace."

Ordinary Fool; That’s All; The Way We Were; The First Time Ever I Saw Your Face; Summertime; No One Is Alone; They Long To Be (Close To You); Alfie; If You Love Me, Really Love Me; What Are You Doing For The Rest Of Your Life; Poor Butterfly; That’s All; Amazing Grace.