Alexander Hawkins Ensemble: No Now Is So... 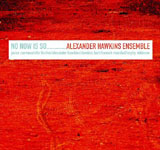 Both the enigmatic title and Red Planet sleeve photography of this debut recording by Alexander Hawkins' six-piece ensemble suggest something out of the ordinary. The feeling is confirmed by a glance at the distinctive instrumentation, which pitches the strings of cellist Hannah Marshall, guitarist Otto Fischer and bassist Dominic Lash against the percussion of Javier Carmona and the Hawinkins' piano, with the wildcard being vibraphonist Orphy Robinson's steel pans. Elsewhere Hawkins is fast making a name for himself, recording with the improvising collective Barkingside and the transatlantic Convergence Quartet, as well as working with drummer Louis Moholo-Moholo and various Evan Parker ensembles.

The 50-minute program is as intriguing as the line-up. Four Hawkins originals sit alongside a solo piano improvisation, four group improvisations and two pieces from the free jazz canon, one by AACM trumpeter Leo Smith and one from Mr. Mystery himself, Sun Ra. That it all hangs so well together is testament to both the strong sense of group purpose displayed on the collective pieces and the bountiful opportunities for expression within the composed tracks.

There is a lot happening here, with the interweaving instrumental threads offering alternative routes through the performances each time. But with the exception of Hawkins' solo, "Old Time Folk Music from Oxford," with its culminating echoes of stride and music hall, the work of this fine cast of improvisers is in the service of a group ethos. This approach is exemplified on "Prelude," where indeterminate tapping, scraping and clapping builds to a six-way headlong dash before being shepherded to a peaceful close by Robinson's tolling pans, evoking the bells of a country church.

More dense interaction features on "Sarah Teaches Kirsty to Read." Propelled by a jaunty stream of eighth-note patterns, the piece recalls Anthony Braxton's Ghost Trance Music, but with a nursery rhyme quality, fizzing around the ensemble while whoever isn't involved interjects extemporized flurries. Eventually the pulse dissipates, leading to a dense string conclave, then finally a return to the opening territory, as piano and steel pans reassert themselves for a satisfying resolution.

Hawkins displays his love of a strong melody through his choice of covers, in addition to his own pieces like "Baobabs," where the aching theme rendered by piano and cello soars over rolling pans and percussion. On Smith's "Nuru Light," straight readings of the beautifully majestic melody alternate with improv passages first for bucolic guitar and pans, and then spiky cello and bass. Hawkins' arrangement of Ra's "Love in Outer Space" takes a different tack, orbiting improvised embellishments around the joyous rollicking theme repeated throughout.

This heady concoction closes on another high point with the off-kilter calypso of "Cowley Road Strut," initiated by Fischer's dancing guitar work before Lash and Carmona channel mutated reggae rhythms. Finally, Hawkin's piano staggers on the offbeat and the piece, sounding as if it might go on forever, lurches on into the sunset with a long fadeout.