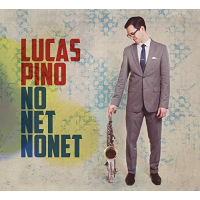 So there is hope after all. With so much jazz these days soaring into realms that are often uncharted and at times unfathomable, it is a pleasure to hear groups such as tenor saxophonist Lucas Pino's No Net Nonet, which are remarkably creative even as they adhere to the basic precepts of melody, harmony and rhythm. Pino's new album, apparently the first under his own name, is awash in likable tunes (seven written by Pino), performed with dexterity and assurance by his world-class ensemble, which has had a regular gig at Smalls Jazz Club in New York City since March 2013.

As a measure of Pino's talent, consider that he wrote the snappy opener, "The Fox" (a tribute to childhood friend Elliott Fox), while he was a high-school student in Phoenix, AZ. Well, that wasn't really so long ago, as Pino has yet to reach the age of thirty. Since leaving high school, he has studied with Dave Brubeck at the Brubeck Institute, earned degrees from the New School and Juilliard, and performed at home and abroad with a number of renowned musicians including Benny Golson, Curtis Fuller, Jimmy Heath, Christian McBride, Carl Allen and David Sanborn. Now he leads his own group, and what a talented alliance it is. Everyone in the band is an ardent team player, and there are a number of resourceful soloists, not least of which is Pino himself who lists among his tenor influences Stan Getz, Lucky Thompson, John Coltrane and Michael Brecker.

As noted, the Nonet opens in high gear on "The Fox," whose muscular solos are by Pino, trombonist Nick Finzer, pianist Glenn Zaleski and drummer Colin Stranahan. Zaleski wrote the lyrical "On the Road" as a bow to Jack Kerouac's novel of that name. Trumpeter Mat Jodrell solos first, followed by Pino, alto Alex LoRe and Stranahan, each of them nestling comfortably within the framework. Pino composed the next five numbers, each one thematic and remindful of his persuasive musical imagination. "Orange" summons images of a burning volcano, "Strange Breakfast" recalls a morning meal in Poland, "Bankenstein" skewers the financial crisis of 2008, "Sunday Play" is an homage to Pino's mentor, Charles Lewis, and the samba "Where You Need to Be" depicts Pino's desire to sample the bright lights and excitement of NYC while living in Stockton, CA.

Zaleski arranged guitarist Kurt Rosenwinkel's eloquent "Homage a Mitch" (Borden, owner and patron saint of Smalls Jazz Club), while LoRe wrote "A Morning Walk" about his experience living in Boston and guitarist Rafal Sarnecki based his impassioned "Three Old Men from the Land of Aran" on a Polish comic book he read as a child. The most commendatory accolade that one can bestow on the various themes is that there is no clear favorite among them. Each one is well above the norm, as is the album as a whole. In other words, a superlative debut for Lucas Pino and his No Net Nonet.

The Fox; On the Road; Orange; Strange Breakfast; Intro to Bankenstein; Bankenstein; Sunday Play; Where You Need to Be; Homage a’ Mitch; A Morning Walk; Three Old Men from the Land of Aran.