By MACKENZIE HORNE
October 26, 2019
Sign in to view read count 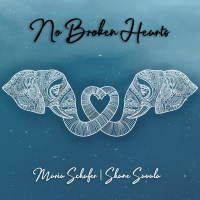 No Broken Hearts is special because while it could function on its own as a fond nod to tradition or a forward-thinking allusion to the modern songbook, it truly functions as a series of love letters—love letters to collaboration, the living history of strong women songwriters, and deeply personal experiences within music. Vocalist Maria Schafer and Los Angeles-based guitarist Shane Savala have collaborated on a number of projects over the course of Schafer's residence in California. An incredibly versatile musician, Schafer adapts to Savala's lines, altering her phrasing to compliment his tasteful comping. The two have a push-and-pull effect on one another and it is this positive stressor that propels the album forward.

It is clear that Schafer is more than a practitioner of music. She is a lover of all music and she has both the vocal flexibility and open-mindedness to diversify her repertoire. Having spent her musical career tipping her cap to the great female vocalists, instrumentalists, and composers who preceded her, it should come as no surprise that No Broken Hearts fits Schafer's established trajectory. "Both Sides Now," a Joni Mitchell original featured on 1969's Clouds (Reprise Records) and 2000's Both Sides Now (Reprise Records), is the watershed moment on the album for both Schafer and Savala, who put down their strongest performances on the track.

No Broken Hearts is inarguably minimalist, yet polished and sophisticated. "Jitterbug Waltz" features some beautiful brushwork and minute bass intrusion, pushing Schafer front and center. The strength of Schafer's performance resides in her expressive phrasing; while purists might reel against it, this aspect of her presentation has a way of modernizing tunes like "Angel Eyes," "The Lady is a Tramp," and "When You're Smiling." Savala, who is as technically athletic and adaptable as his vocalist counterpart, effortlessly compliments Schafer's style. Her penchant for Brazilian music shines on her renditions of "Love for Sale" and the Chrisette Michele/John Legend collaboration "Love is You." Savala deftly navigates Schafer's album-wide twists and turns, whether he is paying tribute to to Joao Gilberto or fingerpicking a Joni Mitchell tuning.

Half Awake; Jitterbug Waltz; Love For Sale; No Broken Hearts; Talk; Make It Real; Both Sides Now; Angel Eyes; Echoes; The Lady Is A Tramp; Shape Your Light (Extended Version); Love Is You; When You're Smiling.